CHAMPION OF CHAMPIONS TROPHY - Third round line up confirmed. 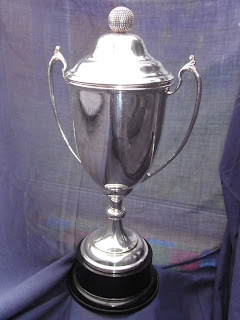 The Ayrshire Champion of Champions Trophy competition has now reached the third round stage, with second round results being confirmed on Sunday the 4th of July.

In recent matches, Steven McEwan (Caprington) received a walkover from Maurice Mulholland (Doon Valley) and will be at home to Scott Ainsworth (Ardeer) who beat Sean Hainey (Prestwick Centre) by 5 & 3 in round two.

A 7 & 6 home win by holder Craig Hamilton (Ballochmyle) over Paul Giffney (Ardeer) put Hamilton straight through to the quarter finals after Shaun Hedger (West Kilbride) and Andrew Thomson (Routenburn) were scratched from the tournament after they failed to complete their tie by the due date.

Stuart Miller (Kilmarnock Barassie) was a 2 & 1 home winner over Alan Watson (Ballochmyle) and now hosts John Haggarty (Louodun) in round 3.

Sam Findlater (Braehead), a 3 & 1 winner against Stuart Campbell (Ayr Seafield) in round 2, is at home again in round 3 when he plays Steven Stamper (Turnberry), who had a notable 1 hole win at Turnberry against John Shanks (Irvine) in round two.

The final third round tie will be between Gordon Munro (Caprington), who had a walkover against James Brown (New Cumnock) in round two, and Jamie Murchie (Beith) who defeated Brian Gibson (Muirkirk) by 6 & 5 in their second round meeting.

The full line up for the third round and quarter finals is:-