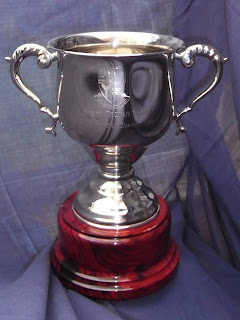 Alastair Travers (Irvine Ravenspark) is the 2021 Ayrshire Seniors Champion after a field of 72 competitors contested the Sandy Provan Trophy over the Rowallan Castle course on Tuesday the 13th of July.

With competitors enjoying fine, sunny, and warm weather, Alastair Travers led the field from early on, playing in the second game out in the morning, his nett score of 70 off his eight handicap being matched only by Michael Steel (Ayr Seafield), with Travers taking the trophy by virtue of the better inward half.

The best scratch score of the day was returned by Paul Denim (Loudoun), his one over per score of 73 edging out Gordon Boyle (Turnberry) by a single shot, and Steve McKnight (Royal Troon) by two strokes, for the scratch prize.

Ronner up for the trophy, fifteen handicapper Michael Steel (Ayr Seafield) won the 57 - 64 age group with a nett score of 70, two ahead of Fergus Henry (Prestwick St Nicholas), playing off nine, on 72 and Bob Cameron of Ayr Belleisle, who was another shot further back on 72, off his nine handicap.

In the 65 and over age category, former trophy winner Allan Merry (West Kilbride), who took the title in 2014 and 2016, had a nett 73, off his nine handicap, to take first place. Six handicapper Keith Ross from Beith was second with a nett 76 whilst third place went to Andrew Brown (Ayr Belleisle) who returned a nett 78 off his handicap of seven.

The nearest the hole prize for the eighth hole was won by Paul Denim (Loudoun) whose tee shot finished 82 inches from the hole. With Rowallan Castle uniquely having a ninteenth hole, a par 3, the players were given the opportunity to conclude their round with a final shot to the nineteenth in an effort to win a nearest the hole prize, and it was Ayrshire Golf Association past President John Rushbury (Royal Troon) who took the honours, hitting his tee shot to 37 inches from the hole.