The closing date for entries to the new 36 hole West Of Scotland Strokeplay Championship is just one week away, with entries to be in the hands of the Ayrshire Golf Association Secretary by 7th May.

The event will be held this year at Loudoun Gowf Club on Sunday 22nd May.


THE WEST OF SCOTLAND
AREA ASSOCIATIONS 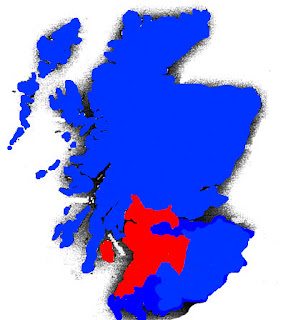 PRESENT
THE 2016 WEST OF SCOTLAND
STROKEPLAY CHAMPIONSHIP
SPONSORED BY


BOTH ON THE COURSE AND IN THE CLUBHOUSE
Posted by AJM at 10:35 am No comments:

Entry forms are now available for the 36 hole Belleisle Cup, a counting event in the 2016 Doc Thom Ayrshire Order Of Merit. 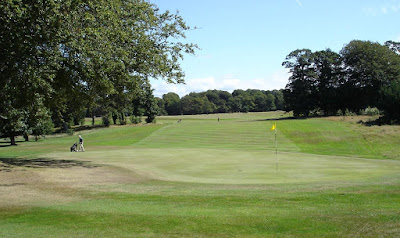 The event is again sponsored this year by Corum, with prize money being increased as a result.

Competitors shall have the courtesy of the Course on Friday 3rd June 2016 on production of an official entry and subject to availability. Tee times must be booked 7 days in advance.
Competitors shall be notified by postcard of starting times and must report 15 minutes before tee-off time.  Failure to appear timeously may result in disqualification.
First tee-off:  7.30 am.     In the event of ties, places decided on count-back.
Any dispute shall be referred to the Committee of Ayr Belleisle Golf Club whose decision shall be final.
Entries, entry fees, certification of handicap and enquiries to:
KEVIN BOYD
Secretary, Ayr Belleisle Golf Club, 36 Marlepark, Ayr KA7 4RN
Telephone:  07900 050496 or Email: kevin.boyd61@gmail.com
(Cheques to be made payable to “Ayr Belleisle Golf Club”)

Competitors this year will be able to enjoy the facilities of the new clubhouse at Belleisle, which opened to the public this week.

Entries are now open for The Byrne Howard Junior Open which takes place over the Portland Course on Sunday 26 June 2016. 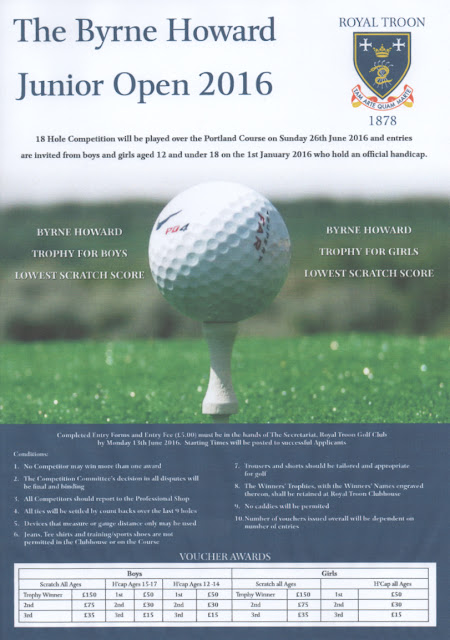 Since its inaugural year in 2011, The Byrne Howard has grown in popularity; attracting competitors from all over Scotland and in 2015, Royal Troon had the pleasure of welcoming a team of junior golfers from Barsebäck Golf & Country Club in Sweden.

This 18 hole competition, a counting event in the Ayrshire Junior Order Of Merit, is open to junior golfers aged 12, and under 18 on the 1st January 2016 who hold an official handicap.

Completed Entry Form and entry fee (£5.00) must be in the hands of The Secretariat, Royal Troon Golf Club by Monday 13 June 2016.

Starting times will be posted to successful applicants.

Entry forms can be downloaded via the appropriate link on the left of this page, under the 'Juniors Info' heading.
Posted by AJM at 9:48 am No comments: 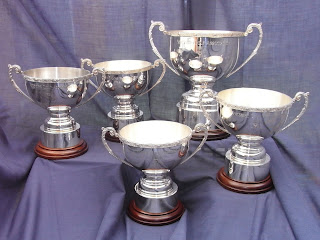 Irvine Ravenspark got their Ayrshire Scratch League Division 2 campaign off to a flying start last week with victory in their opening fixture of the season.

After being relegated from the top division for the first time at the end of last season, the Ravenspark team bounced back to record a home win by 4 1/2 - 1 1/2 over Girvan in their opening game this year.

The only other result posted so far in the five leagues was in Division 1, where Loudoun and Prestwick St Cuthbert shared the spoils in a 3 - 3 draw at Loudoun.

All clubs should now have confirmed all their match dates with the league administrator of their respective leagues.
Posted by AJM at 3:51 pm No comments:

Andrew Shaw (Prestwick St Cuthbert) had a notable win in the first round of the 2016 Ayrshire Junior Champion Of Champions Trophy competition recently, to book his place in the quarter finals.

Drawn away from home against Ayrshire Boys Matchplay winner Robbie Muir (Kilmarnock Barassie), Shaw secured a place in the last eight of the competition with a 3 & 1 win in the tie.

Andrew Shaw now joins Elliot Spence (Loudoun), who had a bye in round one, in the quarter final draw of the competition.

The remaining first round ties are due for completion by 5th June.
Posted by AJM at 3:43 pm No comments: 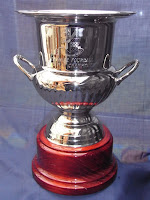 All the first round matches in the 2016 Ayrshire Fourball Championship have now been completed.

The final outstanding first round tie saw Christoper & Scott ireland (Prestwick St Nicholas) winning by 2 & 1 away to Luke Walker & Jack McCall (Alton), to secure a tie away to Troon Merchants in the second round.

Gavin Nimmo (Troon St Meddans) has withdrawn from the Ayrshire Matchplay Championship, to be played next week over Western Gailes. 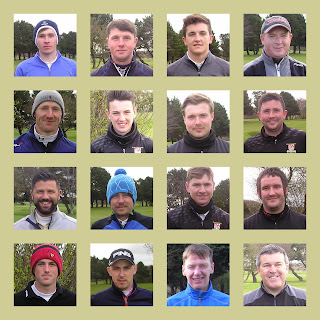 Nimmo will be replaced in the first round draw by Jack Thomas (Irvine) who will now face his clubmate Colin Gray in the opening round on Monday evening.

The revised first round draw is

Sarah Ramsay (West Kilbride) had an excellent round of 84, nett 71 which matched the standard scratch and won the trophy.

Both girls played lovely golf and have a very good 'feel' for the chipping shots and putting - a delight to be with and the organisers look forward to seeing more of them in the future. 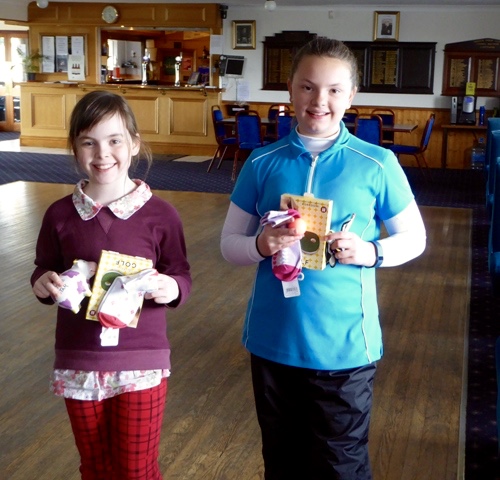 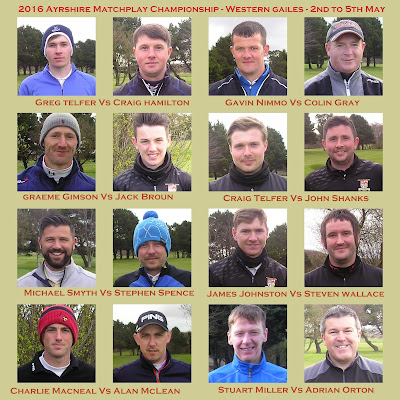 The remaining tie is an all Kilmarnock Barassie affair, with 2015 finalist Stuart Miller up against his fellow Barassie member Adrian Orton.

Ties are scheduled to commence from 5.00 P.M. onwards on Monday 2nd May.