The high hopes of the Ayrshire team, with two wins from their first two matches in this seasons West Of Scotland Inter County League, were severely dented on Saturday 28th October when they suffered a heavy 7.5 - 2.5 home defeat at West Kilbride against Lanarkshire.

Ayrshire never recovered from the defeats of Steven McEwan and Robert McKnight in the first two ties, and the visitors ran out comfortable winners.

In the corresponding youths match, played on Saturday at Strathaven, Ayrshire managed a 5 - 5 draw with their hosts, and might well have snatched victory if Kyle Smith's putt on the final hole, for a half match, had been successful.

Next Saturday Ayrshire face Dumbartonshire, with the senior team away at Kirkintilloch and the youths team at home at Brunston Castle.
Posted by AJM at 12:00 am No comments:

RICKY MAGEE
At the Annual General Meeting of the Ayrshire Golf Association, held at Ballochmyle Golf Club on Wednesday 25th October 2006, Ricky Magee (Caprington) was elected President of The Assiociation for the next two years.
Ricky takes over from outgoing President Ian Guthrie (Ballochmyle) and is the third member of the Caprington club to serve as President in recent years, along with the late John Boyd (1989 - 1990) and John Rutherford (1994 - 1996).
Alasdair Malcolm (Prestwick St. Cuthbert) was elected Vice President for the next two years whilst long serving Secretary /Treasurer Leslie Crawford (Kilmarnock Barassie) was re elected. 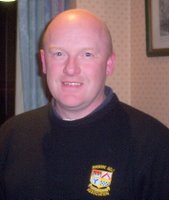 The club representatives present heard reports on a number of aspects of the Associations work over the last year, including coaching, course rating and the achievelents of local players on a county and national level. The various activities of the Ayrshire Junior Golf League were also reported on.

It was also noted with regret that two past Presidents, Morgan Hall and Robin Baker, had decided to step down from their respective posts within the Executive, due to personal reasons, from this A.G.M., and outgoing president Ian Guthrie commented on their invaluable achievements over the years and commented that their presence within the executive and indeed in golf on a county and national level would be sorely missed.

The evening concluded with Douglas Corner, a board member of the Scottish Golf Union Ltd giving members an insight into the proposed changes contained within the recently published Scottish Golf Union governance review document. The presentation prompted a full discussion with a number of questions forthcoming from the floor in regard to the proposals.

Ayrshire made it two wins from two in the 2006 West Of Scotland inter county league on Saturday with a comfortable 6.5 - 3.5 win over Stirlingshire at the Dunblane New course.

A strong Ayrshire side had some fine wins, with the best fightback of the day being recorded by Steven Murray (Troon Welbeck) who was 4 down with 7 holes to play but won 6 of the remaining 7 holes for a two hole victory. Match details (Ayrshire names first) were :-

In the corrsponding Youths match, held at Ardeer on saturday, Ayrshire found themselves on the wrong end of a 7 - 3 scoreline. Match detailse (Ayrshire names first) were :-

Ayrshire play host to Lanarkshire at West Kilbride next saturday (28th October) whilst the youths travel to meet Lanarkshire Youths at Strathaven the same day.
Posted by AJM at 8:35 pm No comments:

Ayrshire took on the South Of Scotland in their annual friendly match on Sunday (15th October), with Ayrshire playing host this year at Brunston Castle.

In the morning foursomes, South Of Scotland took a 3 - 1 advantage, but the local side fought back in the afternoon, taking the singles by 5 - 3 for an overall 6-6 result in the match, which Ayrshire eventually won on a countback over the individual scores in the singles ties.

Ayrshire began their bid for the 2006 West Of Scotland Inter County league title with a narrow 5.5 - 4.5 win over Renfrewshire at Prestwick St. Cuthbert on Saturday 14th October.

In the first tie out, Club Champion of the host club, David Glass gave Ayrshire a point with a 1 hole victory, to offset Alex Gourlay's heavy defeat in his tie.

Single hole wins by Steven McBlain and George Robertson, along with wins from Brian Moore and Robert McKnight left Ayrshire on the brink of victory, and the crucial half point to ensure a win came from Fraser McCall.


In the corresponding youth match, played at Caldwell the same day, Ayrshire fought out a 5 - 5 draw with their hosts.

Next Saturday (21st October) Ayrshire Face Stirlingshire, with the A Team travelling to Dunblane New whilst the Youths are at Ardeer.
Posted by AJM at 10:08 pm No comments: 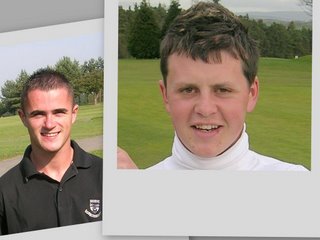 In the SGU ORDER OF MERIT, won by Scott Jamieson (Cathkin Braes), the Kilmarnock Barassie duo of Steven McEwan and Robert McKnight (pictured right) were placed 9th and 26th respectively.

With his win in the US Amateur Championship, Ritchie Ramsay also secured top spot in the 2006 WORLD AMATEUR GOLF RANKINGS, with McKnight and McEwan placed at 179 and 184 respectively.

The other Ayrshire player in the top 40 was former Ayrshire Boys Champion Jamie Mackay (Kilmarnock Barassie) in 40th place.

Other Ayrshire players who featured on the published listing were :-

Ayrshire are well represented in the recently published S.G.U. national squads, with thre players in the Under 18 squad and 2 in the Youths squad.

Ayrshire boys help Scotland Under 16's to win over England 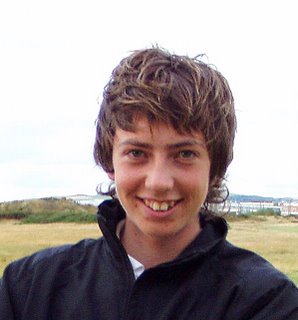 Kyle Smith of Kilmarnock Barassie (pictured left) and Michael Stewart of Troon Welbeck were in the Scotland side who defeated England 8 – 7, in the Scotland v England U16 Boys International played at Hartlepool Golf Club on 8th October.

For the Scotland team, victory gave them the Eddie Shamash Trophy for the first time, since the inception of the annual competition in 1998.

Scotland teailed after the morning foursomes, but during the afternoon singles the Scots fought back to level the match with their English counterparts before edging a narrow win.

3 ½ -1 ½ behind at lunchtime the Scots fought back with wins from Scott Fraser, Tom Spencer, Kyle Smith and Frazer Ogston. Halved matches from
Michael Stewart, Mark Bookless and Sam McLaren gave the Scots a crucial one point advantage at the end of the match.
Posted by AJM at 1:48 pm No comments:

Due to an error with the results submitted from the West Kilbride Boys open, the Junior Order Of Merit final placings published recently were affected. The correct results have now been submitted by West Kilbride and the final placings updated accordingly. The only alteration to the top 7 places is that of 7th place, where Fraser Lawrie (Largs) moves up to 7th place, ahead of Kyle Smith (Kilmarnock Barassie) the final standings are :- 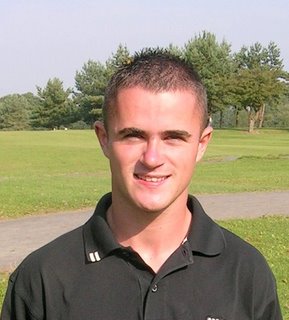 Steven McEwan, this year representing Caprington, retained the Champion Of Champions Trophy last week, having won the title 12 months ago whilst representing Kilmarnock (Barassie).
McEwan created a little history, bein the first player to win the title on two occasions, representing different clubs.
In a very sporting final, played in the true spirit of the game over Troon Darley on Sunday 1st October, McEwan beat Adam Sweeney (Largs Routenburn) by 3 & 2.
Posted by AJM at 10:09 pm No comments:

This week, Ayrshire played host to 12 junior golfers from Reykjavik Golf Club in Iceland, who arrived on Friday 29th September, to sample some of the links and inland courses in South Ayrshire before returning home on Tuesday 3rd October.

The trip for the group of 9 boys and 3 girls was organised by club member Halli Heimisson who himself, as a junior, was part of a similar group who visited Ayrshire in 1997 and played a number of courses throughout the county, culminating in a match against a county select on their final day at Prestwick Golf Club.

Once again, as in 1997, Prestwick Golf Club were happy to actively support junior golf, and the group played the historic links on the day of their arrival this year.

South Ayrshire Council also ensured that the trip would be an enjoyable and memorable one for the visiting party, arranging for the group to play at the Darley, Fullarton and Seafield courses during their visit, whilst South Ayrshire Depute Provost, Clr. Mary Kirkpatrick, welcomed the visitors on their arrival in South Ayrshire and handed over small momentoes to the visiting players.

In a busy schedule, the party also intended to take in a visit to Turnberry as well as playing at nearby Brunston castle.

During the 1997 visit, Ayrshire presented a salver for competition between the visiting juniors, and on that occasion the prize was won by Halli Heimisson, who organised this years trip.

Email ThisBlogThis!Share to TwitterShare to FacebookShare to Pinterest
Alasdair Malcolm of the Ayrshire Golf Association presents a salver to the visiting juniors from Reykjavik Golf Club for the party to compete for during their stay. 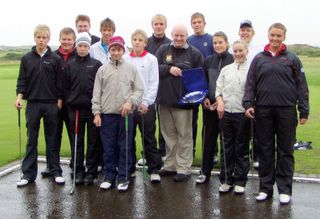 John Cairney (Irvine Ravenspark) is the 2006 winner of the Doc Thom Salver for the Ayrshire Order Of Merit after a victory in the final qualifying competition, the Arrol Cup, at Prestwick St. Nicholas took him clear at the top of the table.

Harkins, who also gained points in the penultimate event, the Welbeck Links, hoisted himself into third place in the Order Of Merit as a result of his late season performances, just behind former winner Barry Crawford (West Kilbride) who took the runner up spot.

Final Placings in the Order Of Merit were :-

The defending Champions, Renfrewshire, who claimed the crown for the first time in nine years last season ended Ayrshire hopes of progressing to the semi finals of the 2006 Area Team Championships when they swept to a 7-2 win in their final Group C match at Paisley on Sunday 24th September, to seal a place the October semi-finals at Glasgow Gailes.

The Ayrshire side never recovered from a 3-0 defecit after the morning foursomes as Renrfrewshire kept their bid for back-to-back Scottish Area Team Championship titles on course.