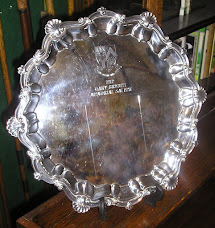 are the first club through to the quarter finals of the scratch club team knockout competition for the Gary Bryden Memorial Salver following a notable win over Royal Troon in their second round tie, played on Friday the 29th of April at the St Nicholas links.
Prestwick St Nicholas won the two singles ties, Sandy Buchanan beating Cameron McGarvie by 5&3 and
Jay Houston beating Scott Newman by 4&3, whilst Royal Troon took the foursomes ties, Blair Morton & Russell Stewart beating Alistair Belford and Patrick Smiley by 5&3 to give a final match score of 2 - 1 in favour of the home side.
Prestwick St Nicholas now face an away tie in the quarter finals against either Largs or Irvine Ravenspark.
The seven first round ties in the competition are due to be completed by the 15th of may with all the remaining second round ties due to be decided by the 19th of June.
Posted by AJM at 11:56 pm No comments: 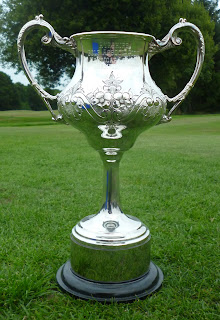 Three of the six qualifying sections in the 2022 Ayrshire Handicap League Championship are under way after the recent round of fixtures.


In SECTION A, Portmann followed their narrow defeat away from home in their opening tie against Kilmarnock Barassie with an equally tight 3.5 – 2.5 home win over Royal Troon in their second tie of the campaign, whilst Tam O Shanter and Kilmarnock Barassie fought out a 3-3 draw in their tie at Belleisle in Ayr.

In the latest fixtures in SECTION B, Auchenharvie opened their title bid with a 4.5 – 1.5 win away to Alton whilst Prestwick St Nicholas fought out a 3 – 3 draw with their visitors from Moorpark.

In SECTION E, the opening fixture saw Troon Welbeck secure a narrow 3.5 – 2.5 away win against near neighbours Troon Portland.

Ties in the qualifying sections will continue throughout the summer, with the winners of each section and the best two overall runners up progressing to the knockout quarter final stage.

CHAMPION OF CHAMPIONS TROPHY - Morton and Hamilton through to round 3 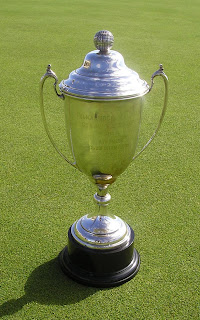 Blair Morton (Royal Troon) and Keith Hamilton (Ayr Belleisle) are the first two players through to round 3 of the 2022 Ayrshire Champion of Champions Trophy competition.

Playing at home in round 2 against Andy MacDonald (Auchenharvie 88), Blair Morton won his tie by 6&5 to set up another home tie in round 3, against either Tom Mitchell (Shiskine) or Adam Sweeney (Prestwick St Cuthbert)

Keith Hamilton was also at home in round 2, against Scott Martin (Troon Welbeck), and a 5&4 victory set up an away tie in round 3, against Robert Cruickshanks (Moorpark) or David Shields (Ayr Seafield)

The remaining second round ties are due to be completed by the 15th of May.

PRESIDENT'S PUTTER - First round ties completed whilst two clubs are through to round three.

The three first round ties in the 2022 handicap club team knockout competition for The President's Putter have been completed, whilst two clubs have already booked their places in the third round.

In round one Ayr Seafield won 2 - 1 away to Prestwick St Cuthbert and will be at home to Moorpark in the second round after the North Ayrshire club won their opening match 3 - 0 away at Annanhill.

Kilmarnock Barassie also progressed at the expense of Abbottsford, to compete the second round line up.

Two second round ties have been played so far, with Tam O Shanter beating their visitors from Stewarton 2 - 1 to set up a visit to either Irvine Ravenspark or Auchenharvie 88 in the third round, whilst Drongan also won their home tie against Braehead by 2 - 1 to secure an away tie against West Kilbride or Alton in the last sixteen.

The second round ties are all due to be completed by the 15th of May.

AYRSHIRE MATCHPLAY CHAMPIONSHIP - Draw for the 2022 competition at Ayr Belleisle 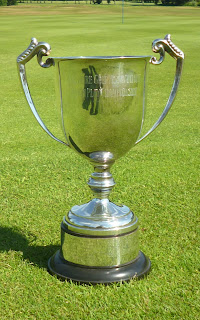 The draw for the 2022 Ayrshire Matchplay Championship, to be held over the Ayr Belleisle golf course from Monday the 2nd of May until Thursday the 5th of May, has been published.
The top 16 available players from the 2022 Ayrshire Strokeplay Championship, with an aggregate score of 151 or better, qualified for the matchplay competition.
Top qualifier is the new Ayrshire Strokeplay Champion Scott Brown (Turnberry) whilst the matchplay title holder Craig Telfer (Turnberry) successfully qualified to defend his title.
Nine member clubs are represented in the draw, with multiple players from Royal Troon , Turnberry and Prestwick St. Cuthbert included.
If any of the qualifiers become unavailable to play in the competition prior to commencement of the first round, they are requested to contact the Area Secretary, Alasdair Malcolm, as soon as possible, to allow a reserve to be brought in as a replacement.
The full first round draw, to be played on MONDAY 2nd MAY is :- 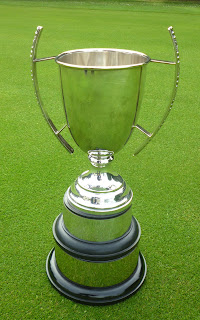 A capacity field contested the 2022 title in fine, sunny, conditions over the Prestwick links, where an unusual North/North East breeze which stiffened throughout the mid afternoon made scoring testing.

Out in the first group of the day, Scott Brown posted the lead in the first round with a one under par total of 68, leaving him a single shot ahead of former winner Craig Hamilton (Ballochmyle) and Adam Sweeney (Prestwick St Cuthbert) on 69.

In the second round, Scott Brown repeated his morning effort with a second successive 68 for a two under par total of 136 for the 36 holes, and a six shot victory, ahead of runner up Iain Brown (Largs) who followed a morning 73 with a fine 69 in the afternoon for a 142 total overall.

Craig Hamilton added a second round 74 to his morning score of 69 to take third place, one shot further back on 143, whilst Max Barclay (Ayr Belleisle) returned rounds of 74 and 71 for a 145 total and fourth place.

The remaining prizewinners were Adam Sweeney in fifth place, a second round 77 giving him a total of 146, and Keith Hamilton (Royal Troon) who returned rounds of 73 and 74 for a 147 total and sixth spot overall.

Scott Brown's win gave him the Ayrshire Strokeplay title for the first time and completed a unique county title record in winning the strokeplay, matchplay and Champion of Champions titles in Ayrshire at both boys' and men's level, having won the boys strokeplay in 2008, the two matchplay titles in 2008 and 2009 respectively, and the two Champion of Champions titles in 2009 and 2011. having won the Junior Order of Merit title in 2008, he only needs to add the Doc Thom Ayrshire Order of Merit title in the future to extend his unique record in county events.

The full list of scores in the 2022 Ayrshire Matchplay Championship are:-

AYRSHIRE CHAMPION OF CHAMPIONS - Round one completed 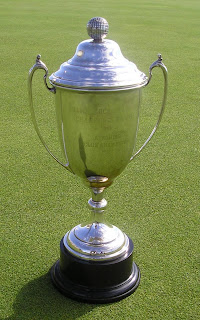 The round one matches in the 2022 Ayrshire Champion of Champions trophy competition have been completed.

The remaining four first round ties that were outstanding this week all resulted in walkovers for one of the two participants.

The full draw for round 2 is:-