Ayrshire were defeated by 3.5 - 1.5 in their visit to St. Nicholas on Sunday 27th February 2005, in one of the traditional pre season friendly matches against member club teams.

In tie 2, Gary Neil (Caprington) and Craig McLaughlin (Largs) won through by 2 & 1 against Gordon Adams and John Ashton.

The third tie finished all square between Alastair Leggate (Kilmarnock Barassie) and John Sloan (Doon Valley), and the host club pairing of Andy Huxtable and Ian Donaldson. The Ayrshire pairings cause was assisted by a hole in one achieved by John Sloan at the 10th hole.

Next Sunday the Ayrshire select will play Loudoun Gowf Club.
Posted by AJM at 10:03 pm No comments:

The draws for rounds 1 and 2 were made recently, and details will be posted to competitors involved, in due course.

Anderson or Glass Vs. Del Chamberlain (Welbeck)
Fulker or Miller Vs. Jamie Duncan (Brodick)
Mathie or Malcolmson Vs. Stuart Peters (Doon Valley)
Yates or McCubbin Vs. Cameron Laughlan (Alton)
McKinnon or Park Vs. B. Main (Auchenharvie)
McCaig or Lawrie Vs. David Robertson (Crosshouse)
Stewart or McLean Vs. Ian Gray (Chase)
Hamilton or Taggart Vs. A. Fraser (Annanhill)
Hamilton or Riddell Vs. Andy Clark (Carrick Lodge)
Bolland or Bryden Vs. Peter Townsley (Ardeer)
McLellan or Gourlay Vs. D. Gemmell (Braehead)
Richmond or Courtney Vs. Alan Mulholland (Moorpark)
Hamilton or Kinnel Vs. Neil McCormack (New Cumnock)
Lammie or McCulloch Vs. Thomson or McInally
Walker or Ward Vs. Robertson or McIntyre
McFarlane or Moore Vs Pennington or McCahill

The draw for round 3 will take place after completion of round 2 matches.
Posted by AJM at 9:05 pm No comments:

The draw for the 2005 Ayrshire Golf Association Summer League was made at the Annual Dinner on Friday 25th February. Ballochmyle will be bidding to make it a hat trick of wins in the event, after their victories in both of the first two seasons of the competition.

With 17 teams competing, there will be two leagues of 4 and 3 leagues of 3, with the winners of leagues 4 & 5 requiring to play off for a semi final place.

The draw for the league sections reads :-

Guests of the Association included S.G.U Vice President Gordon McInnes along with representatives from the other West Of Scotland county associations, clubs who hosted events throughout 2004, sponsors and county coaching staff.

After a welcome to the club from Ravenspark Captain, Milton Murray, the company enjoyed a hearty meal, before proceeding to the presentation of the trophies for the 2004 season.

The first award presented was the Ayrshire Fourball Trophy, with the winning team of Gordon Hope and Steven Craig accepting the trophy on behalf of Annanhill G.C.

Winners of the Club Championship were Largs Golf Club, with former Ayrshire Junior Golf League Chairman Gordon Cunningham accepting the trophy on behalf of the club.

Tommy McInally (Loudoun) was present to accept the Champion Of Champions Trophy, and the presentation of trophies culminated in Barry Crawford (West Kilbride) being presented with the Doc Thom Salver for the outstanding performance over a number of selected events throughout the season.

The draw for the Summer League competition was made before the evenings programme progressed to the speeches.

The first speaker proposed the toast to The Ayrshire Golf Association. Douglas Mill, Chief Executive of The Law Society Of Scotland, with a witty, informative and very knowledgable speech set the tone of the evening, which prompted a suitable reply on behalf of the association by Past President Baker.

The main guest speaker of the evening, proposing a toast to the game of golf, was well known local after dinner speaker and erstwhile comedian, Jim 'Buller' Reid, who certainly did not disappoint, having the company laughing almost continually during his presentation.

The evenings programme concluded with a vote of thanks from A.G.A. Vice President, Ricky Magee (Caprington).
Posted by AJM at 10:15 pm No comments:

Due to unforseen circumstances, the meeting due to be held at Northfield on 17th February has had to be cancelled, but will be rescheduled to another date. The new date will be circulated in due course.
Posted by AJM at 8:36 pm No comments: 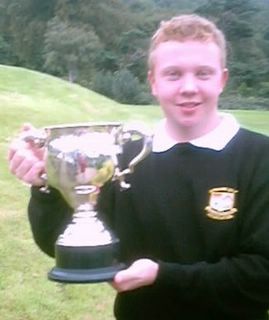 THE AYRSHIRE JUNIOR GOLF LEAGUE - Draws for the 2005 competitions

The draws for the 2005 Ayrshire Junior Golf League competitions were made at the Executive Meeting on Monday 7th February by Chairman Douglas Aitken (Caprington), in his final duty before his impending emigration to Turkey.

In the LEAGUE CHAMPIONSHIP defending champions Ardeer have been drawn in the four team section D, along with Caprington, Irvine Ravenspark and Skelmorlie.

The full draw is:-

In the UNDER 16 KNOCKOUT TROPHY, holders West Kilbride received a bye into round 2 where they will play host to Annanhill. 2004 runners up, Prestwick St. Cuthbert also received a bye and play host to near neighbours St. Nicholas in round 2, whilst there is another local derby when St. Meddans and Welbeck meet at Troon. The full draw is:-

In the CHAMPION OF CHAMPIONS TROPHY, Cameron Gray (West Kilbride) returns to defend the title, and faces Stephen Hart of Largs Routenburn in a second round match. With some of the competitors details still to be notified, the full draw is :-

The Season begins on Sunday 10th April with the traditional opener, The Ayrshire Boys Team Championship, being hosted this year by Ballochmyle Golf Club.