19 of the best young golfers in Ayrshire are in the starting field of 256 for the 2008 Scottish Boys Championship, which takes place at Southerness Golf Club from 7th to 12th April.
Alan Bruce (Kilmarnock Barassie) is the first of the Ayrshire boys in action when he tees off in the second match, at 0653 on Monday 7th April, against Steven Sidowra (Camperdown)
Scott Brown (Turnberry) - pictured right - is off at 0717 on the Monday, against local player Liam Johnston (Pines), and also in action early on day one is Michael Stewart (Troon Welbeck) - pictured left - who is one of the players fancied for the title, and opens his bid against Jamie Binning (Ranfurly Castle). 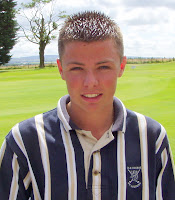 The two Ayrshire players have the prospect of facing each other in round 2, should they progress on the Monday.

As well as Michael Stewart, the Troon Welbeck club provide three other players in the championship :- Sam Findlater, Marc Smith and Charles Doyle. 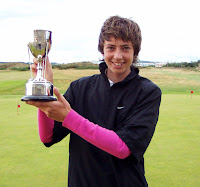 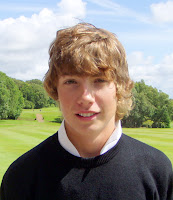 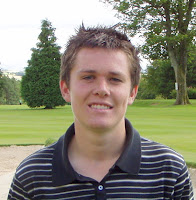 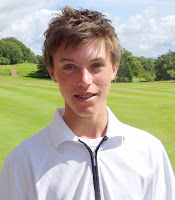 41 champions from Ayrshire clubs will compete over the summer months in a bid to be crowned the 2008 Ayrshire Champion Of Champions.

The scratch matchplay knockout event begins this month and culminates in the semi finals and final which will be played at Royal Troon on 1st and 8th August respectively.

The draw for the first two rounds is :-

35 clubs will contest the 2008 Ayrshire Golf Association Fourball Championship, with the draw for the competition being announced recently.

Ayrshire golf is in mourning after the tragic death of 18 year old Loudoun Gowf Club member Robert Jamieson in a three-car accident on the A91 in Fife around 10.00 p.m. on Tuesday 11 March, which happened between Guardbridge and St Andrews.
The crash also claimed the life of fellow Elmwood College student Duncan Beaton from the Forfar area.
A woman driver was seriously injured and another motorist hurt. 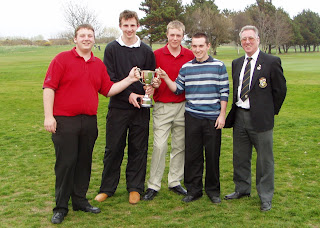 Robert - pictured with fellow Loudoun junior team members Craig Goodwin, Michael Cameron and Darren Tannock - was a leading light in the junior section at Loudoun and was a member of the team who won the Andrew D. Nimmo Trophy during the Ayrshire Boys Team Championship competition in both 2006 and 2007.
On behalf of The Ayrshire Golf Association,
Sincere sympathy is extended to Robert's family, friends and clubmates at this time and no doubt the thoughts of many of the golfing community in Ayrshire and beyond will be with those closest to Robert, and his young friend Duncan.
Posted by AJM at 8:33 pm 1 comment:

The West Of Scotland Girls Golfing Association, which celebrated its Golden Jubilee a year ago, has recently launched a new website at http://www.wsgga.btik.com


Membership of the Association is open to any girl resident in the West of Scotland who is under 18 years of age on 1st January 2008, and has an LGU handicap. The association also have an 18-21 section.


"Our association covers the whole of the West of Scotland, including Ayrshire, and is designed to encourage any girl with a CONGU handicap to join us and play in medals and matches at a variety of prestigious courses throughout the West of Scotland.
The girls are very friendly and the Committee who run the organisation will give new members a warm welcome.
We wonder encourage girls who play golf, and their parents, to look at our website and see what we have to offer ".

Former West girls include Janice Moodie and Mhari Mackay, who are now both playing on the LPGA Tour in America.

For those girls who may be interested in joining the West Girls, annual membership is £15.

Further fixtures will be updated on the West Girls site over the coming weeks. The site can be accessed by clicking on the link on the left of this page.

Scotland boys won the quadrangular tournament, played at St. Cyprien, despite crashing to defeat by Sweden in the final match on Sunday.

The Scottish side finished tied on points with Sweden, but took the title on a countback.

After negotiating the first two days without defeat, Michael Stewart (Troon Welbeck) suffered two defeats against Sweden, going down 4 & 3 in the foursomes and by 2 holes in the singles.

Results of the matches played on Sunday 9th march were :-

Michael Stewart (Troon Welbeck) managed a half in the foursomes and a win in his singles as Scotland beat Italy 5.5 - 3.5 in their second match in the Boys Quadrangular tournament at St Cyprien, France on Saturday 7 march 2008, to maintain their 100% record.

Scotland took the foursomes 2-1 with Stewart and combining with Scott Mclaren (King James VI) for a half match in their tie.

Scotland won the singles by 3.5 - 2.5 where Stewart had a 4 & 3 win in difficult conditions, with strong wind

In the other match played on Saturday, defending champions Sweden lost by 5 - 4 to France.

Stalter halved with Bjork
Levy bt Blom 1 hole
Weber lost to Carlsson 5 and 4
Vielledent lost to Jennevret 5 and 4
Brun bt Nordqvist 3 and 2
Wattel bt Gaad 5 and 3
Posted by AJM at 11:36 am No comments:

players in the tournament.But, on the opening day, Scotland rose to the occasion and slew the giants by the convincing margin of 6 1/2-3 1/2.The morning foursomes set the tone for the day with the Scots making a 3-0 clean sweep and also winning the singles session 3 1/2-2 1/2.

Sweden beat Italy 6-3 in the other opening day match.

Prestwick golfer Ross Drummond had a closing round of 71, 1 under par, in the European Seniors Tour DGM Barbados Open at the Royal Westmoreland club on Friday, leaving him on a 3 round total of 216 and in a tie for 9th place.

Fellow Scot Bill Longmuir took the title after a closing round of 65 for a 206 total.

The next scheduled event on the tour is in Portugal at the end of March, when the Azores Seniors Open takes place at Batalha Golf Course.
Posted by AJM at 12:53 am No comments:

Ross Drummond from Prestwick slipped back to joint 12th after round 2 in the opening event of the 2008 European Seniors Tour, the DGM Barbados Open at the Royal Westmoreland club.

Drummond followed his opening 71 with a 2 over par 74 for a 145 total, leaving him trailing the leaders by 7 shots.

Delroy Cambridge (Jamaica) and Bob Cameron (England) are joint leaders on 138.
Posted by AJM at 12:41 am No comments:

Ross Drummond from Prestwick, who had a successful rookie year in 2008, is off and running in the new campaign for over-50s with a one-under-par 71, leaving him three shots off the pace in the early stages of the eighth DGM Barbados Open at Royal Westmoreland Golf Club.

Fellow Scots John Chillas, Martin Gray and Bill Longmuir are on the 74 mark.

A run of four consecutive birdies on the back nine helped Jamaica’s Delroy Cambridge pip his close friend Jerry Bruner of America to the clubhouse lead, on 68.

Ian Woosnam, playing in his first European Seniors Tour Event after turning 50 at the weekend, finished on level par after an up and down round of 72, which included birdies at the fifth and sixth holes and a triple bogey 7 at the ninth.