The R&A and the USGA today announced the introduction of a new Local Rule to the Rules of Golf that eliminates the penalty when a ball is accidentally moved on the putting green.

The Local Rule will be available for any committee in charge of a golf competition to use starting 1 January 2017. It will be adopted by The R&A and the USGA in all of their championships, qualifying competitions and international matches.

David Rickman, Executive Director - Governance at The R&A, said, “For the past several years, as part of The R&A and USGA’s Rules Modernisation initiative, we have considered the penalty for a ball that is accidentally moved on the putting green. 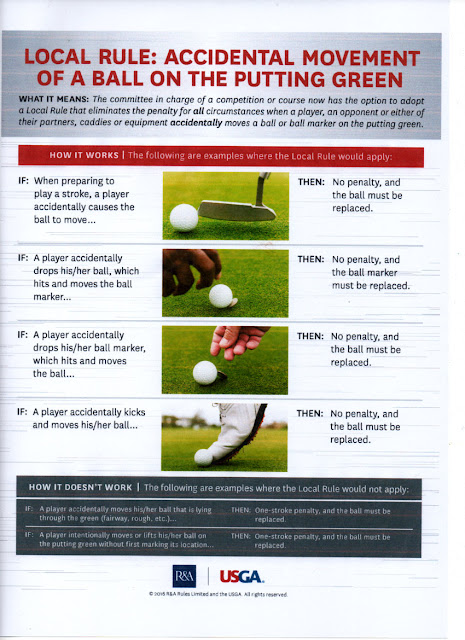 “Both Rules Committees agreed that it needed to be changed and decided that in this particular case it was important to act now, through a Local Rule, rather than wait for the next overall set of revisions to the Rules of Golf.”

Thomas Pagel, Senior Director, Rules of Golf and Amateur Status at the USGA, said, “Eliminating this penalty responds to the concerns we have heard from both golfers and committees about the difficulties in applying the current Rules when a player accidentally causes a ball to move on the putting green.

“This change is a good example of the type of Rules Modernisation changes we hope to implement after completing our fundamental review of all of the Rules. We are looking for ways to improve the Rules by making them easier to understand and apply.”

Use of Local Rule
The Local Rule has been welcomed by all of the major golf Tours worldwide, and the PGA TOUR, European Tour, LPGA, PGA of America and the Masters Tournament are among the golf organisations that will implement the Local Rule for all future events, beginning 1 January 2017.

An infographic is also available to illustrate how the new Local Rule should be used. If a Committee wishes to introduce this Local Rule, the following wording is recommended:

When a player’s ball lies on the putting green, there is no penalty if the ball or ball-marker is accidentally moved by the player, his partner, his opponent, or any of their caddies or equipment.

This Local Rule applies only when the player’s ball or ball-marker lies on the putting green and any movement is accidental.

Note: If it is determined that a player’s ball on the putting green was moved as a result of wind, water or some other natural cause such as the effects of gravity, the ball must be played as it lies from its new location. A ball-marker moved in such circumstances is replaced."

The Local Rule and a detailed Q&A is also available to download.

DOON VALLEY COURSE UNDER THREAT - Is the Patna course to close in the new year ?

News from Doon Valley Golf Club this week causes grave concern over the future of the Doon Valley golf course in Patna, with indications being given by the club that the course has been earmarked for closure by 31st March next year. 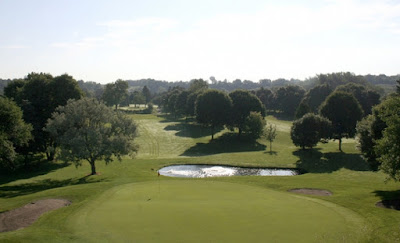 The course, owned and maintained by the local authority, East Ayrshire Council, is the home of the Doon Valley Golf Club which provides a significant facility for local golfers in the dalmellington and Patna areas.
The club itself has enjoyed success in county events over the years, winning the Ayrshire Fourball Championship in 1997 and Division 5 of the Ayrshire Scratch leagues in 2013.
The club has also produced a number of fine golfers over the years, including the present Match Secretary John Sloan, who won the Ayrshire Champion Of Champions Trophy final over Royal Troon in August and local girl Pamela Feggans who followed a fine amateur career by progressing to the professional ranks as both a tour player and coach.
According to information posted by the club on social media, the news broke in the past week about the closure of the Golf Course on March 31st 2017, with no more golf allowed from that date.
According to the statement from the club, the club itself have not been informed by the local authority of the closure of the course, although it is understood that the green keeping staff were informed of the decision on Thursday 24th November.
The club are questioning why the club committee were not informed first and indeed have apparently still not been informed by East Ayrshire Council as to the current position.
The club social media release indicate that since the news broke last week the club have contacted the local authority on numerous occasions but still await reply.
The statement goes on,
"This is a major talking point for the club as we still don't know what is actually happening to the club and still we await reply. Why?
The way East Ayrshire Council has treated this club in the last few years has been nothing short of ridiculous."
Golf facilities in East Ayrshire have seen a number of changes in recent years, with the most significant to date being the transfer of the local authority run Caprington course to full management by the Caprington Community Golf Club. For the Doon Valley club and course however, the timescale alluded to for the closure leaves little time for interested parties to consider the way forward for the club and course.
The loss of the Doon Valley course would be a major blow to exponents of the game in the Doon Valley and surrounding area, as well as the Ayrshire golf scene as a whole.