AYRSHIRE Vs SOUTH OF SCOTLAND - Ayrshire side defeated in seasons opener.


Ayrshire lost out to the South Of Scotland in their annual match for the Centenary salver at Stranraer on Sunday 25th March, going down by 11.5 - 6.5.

The 12 man team, comprising 4 Under 16's, 4 Under 18's and 4 youths shared the morning foursomes 3 - 3 but were soundly defeated in the afternoon singles.

Highlights for Ayrshire were Callum Gorrie securing both points in 2 very good wins. His partner in the morning foursomes Darren McCutcheon was unlucky not secure both points after losing a one hole lead to a very good birdie from his opponent at the last.

Louis Murray took his game to the last green in both rounds to secure a win with Jack McCluskey in the morning and a very good half in the afternoon, his succesful 30ft birdie putt at the last being matched by his opponent who holed from from 8 ft for a share of the spoils.

The other Ayrshire points were secured by Jack Thomas and Stuart Easton, who always appeared in control of their morning foursomes despite being taken to the last hole, Euan Walker with a comprehensive win in the singles and Blair Gavin who secured a halved match in the afternoon.

Ayrshire were to the fore at the 2012 Scottish Golf Awards dinner, held at the Crowne Plaza Hotel in Glasgow on Friday 23rd March.

As well as Largs' Sam Torrance receiving a Lifetime Achievement award, Troon Welbeck's Michael Stewart was presented with the Mens Amateur Golfer OF The Year award whilst Kilmarnock Barassie's Euan Walker begame the innaugural recipient of the Adam Hunter Award, presented this year in memory of the late SGU coach.

Torrance, one of Scottish Golf’s most popular personalities, was given the award in the year that marks a decade since he led the European team to victory over the United States at The Belfry.

During a glittering 500-guest sell-out ceremony at the Crowne Plaza Hotel in Glasgow, Torrance received the award in the company of family and friends, among them his father, Bob, his lifelong coach.

"It was a very special night for me, especially having my wife and three children present, along with my parents and friends from Ayrshire.
"I have enjoyed a wonderful career and being handed the award was another memorable occasion for me. I always love playing in Scotland and I was overjoyed to be honoured in my home country."

Torrance played in eight consecutive Ryder Cup teams, famously triumphing in 1985 when he sank the winning putt to secure a first-ever victory for Europe, and has been made an MBE and an OBE.
Since turning professional aged 16, Torrance has won 21 titles on the European Tour, 11 European Senior Tour titles and three European Senior Tour Order of Merit titles. Torrance, who will seek Senior Open glory in his native Ayrshire at Turnberry this summer, was also a Dunhill Cup winner for Scotland in 1995, together with Montgomerie and Andrew Coltart.

A celebration of Scottish Golf’s achievements over the past 12 months, the prestigious event at the Crowne Plaza – hosted by the Scottish Golf Union and the Scottish Ladies’ Golfing Association - saw all proceeds going towards the development of young golfers in Scotland.

A unique collection of golf's most-sought after trophies greeted guests on their arrival - the Claret Jug, the Walker Cup, the Solheim Cup and, of course, the Ryder Cup.

Scotland’s leading male and female amateurs from 2011 – James White and Louise Kenney – were presented with their Awards, while Stewart, now in the professional ranks, collected the Scottish Amateur Golfer of the Year title.

The work of clubs at grassroots level were recognised with the RBS Junior Club and Volunteer of the Year Awards, with special video messages from 18-time major champion Jack Nicklaus for the winners.

A new Player of the Year Award - voted by readers of www.scottishgolf.org - was also awarded to David Law, last year’s Scottish Amateur champion.

A special award was presented in memory of Adam Hunter, the former European Tour player and coach who sadly passed away in October after a two-year battle with leukaemia. In Adam’s memory, one of the country’s most promising young golfers, Euan Walker, from Kilmarnock (Barassie), was awarded a £500 grant towards his coaching and development.

Annodata is one of Europe’s largest independent vendors for print, document, data and communication technologies and the company is the official supplier of office equipment to the Scottish Golf Union.

The full list of award winners reads as follows:

A junior golf championship, once lauded as the biggest one day junior competition in the world, has apparently been dropped from the South Ayrshire Council golf events calendar this year.

The prestigeous Tom Lehman Trophies competition, played over the municipal courses at Troon, was innaugurated in 1998 after the US professional Tom Lehman (pictured) financed the purchase of the trophies following his Open Championship win in 1997.

Administered by the council department responsible for the Ayr and Troon golf weeks and the Girvan Golf Classic, which are mainly targeted at the adult golfer, the Tom Lehman event catered for junior golfers, both girls and boys, of all ages and abilities and in its heyday attracted an entry of over 400 youngsters.

Despite a decline in numbers over recent years, the event still attracted a good entry in all categories but, for whatever reason, appears to have been discontinued this year with no publication of a date for the event evident and no indication whether the demise of the event will be a permanent one.

The ommission of the event from the South Ayrshire Golf Events portfolio seems all the more strange given the commitment to the promotion of junior golf which the local authority has succesfully embraced over many years, with the ClubGolf initiative now active in every primary school in the area.

Over the last few years a pre handicap competition preceeded the Tom Lehman competition, targeted at younger golfers not yet ready to tackle the longer courses of Darley and Lochgreen, and this proved a succesful extension of the junior golf competitions available. It is believed that, despite the end of the Tom Lehman competition, the pre handicap event will take place in some format this year, under the auspices of the council's golf administration department, on a different date to be confirmed.

The apparent demise of the Tom Lehman event, a potential showcase competition in Ayrshire and beyond, is an unwelcome development which will hopefully be revisited in future years by the powers that be, and the event will re-emerge to once again take the prestigeous place amongst the junior county events that its history and potential deserves. 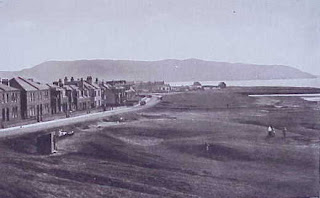 The 2012 Carrick Speakers Open will take place at Girvan golf course on Sunday 29th April and entries are now being invited for the event.

Entry forms have been forwarded to clubs and a verson can be downloaded from this site, via the appropriate link on the left of the page under the 'Mens Info' heading.

Ayrshire will open their competitive season on Sunday 25 March with a boys/youths team travelling to contest the Centenary Salver against the South Of Scotland at Stranraer.

The match will consist of 6 foursomes in the morning and 12 singles in the afternoon.

The Ayrshire team selected to contest the opening fixture is :- 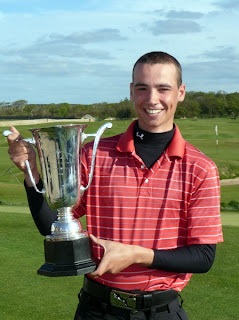 Ayrshire will have 16 players in the 256 strong field for the 2012 Paul Lawrie Foundation Scottish Boys Championship which takes place at Murcar Links in Aberdeen from 9th to 14th April.

The Ayrshire challenge will be led by defending champion David Wilson (Troon Welbeck) - pictured left - who took the title in dramatic style 12 months ago at Dunbar.

Kilmarnock (Barassie) provide 6 of the Ayrshire contingent, with a further four from Irvine (Bogside) and three from Troon Welbeck. Ayr Belleisle, West Kilbride and Prestwick St Cuthbert provide the remaining Ayrshire players bidding to be the 2012 champion.

Details of first round matches involving Ayrshire players are :-

(From the Calcarson Golf Agency)

Playing in the first game, the the scratch player from Troon Welbeck, who also listed Hearts and Dunfermline amongst hs former football clubs, finished two shots clear of the field with a 66.

In the men's event, Jack McDonald (Kilmarnock Barassie) - pictured - struck a highly credible 78 in the conditions for a total of 223 (9 over par) to pip Scottish international Graeme Robertson by two shots.


Robertson, who took 71 shots (1 under par) in an incredible morning's golf, fell foul of the tournament referee (after a lengthy and conisdered discussion) for having taken a number of preferred lies in contravention of the tournament conditions; finally signing for a score of 79 and second place.

Dewi Merckx, also from Stirling, who had led after the first two rounds struggled in the conditions to a score of 80, just ahead of Fairmont winner Chris Harkins (Strathclyde) who, like Robertson, had to add penalties to his score before signing his card.

Stirling I captured the men's team prize - McDonald and Robertson being joined in a 10-shot triumph by former Order of Merit winners David Booth and Zander Culverwell.
In the women's event, Stirling's Eilidh Briggs continues to dominate the Scottish Order of Merit events with scores of 74, 78, 81 for a total of 233 to win by 14 shots.

At the Scottish Universities Championships at Moray Golf Club in ten days time, Eilidh will have the unrivalled opportunity to complete a season's "Grand Slam" of the four Scottish student women's Order of Merit events - the first time this will have been achieved.
Along with Becka Wilson and Harriet Beasley, Eilidh also picked up the women's team prize.