16 players from Ayrshire clubs take their place amongst the 256 competitors in the Scottish Boys Championship when it returns to West Kilbride from Monday 10th to Saturday 15th April 2006.

The hopes of the host club will rest with Boys Internationalist Cameron Gray who heads a strong Ayrshire challenge, including Under 16 internationalists Kyle Smith (Kilmarnock Barassie) and Michael Stewart (Troon Welbeck) alongside the current Ayrshire Boys Strokeplay and Matchplay champions, the Kilmarnock Barassie pair of Jamie Mackay and Euan Brown.

The first round ties involving Ayrshire Players are :-

After the 2 previous matches had fallen victim to the weather, Kilmarnock (Barassie) played host to the final club challenge match of the season for the Ayrshire team.

Both sides fielded strong teams with Barassie taking the early lead with Scottish internationalist Robert McKnight edging out Tom Loy in a closely contested match, by 1 up in the lead tie.

The 2nd tie was declared a half with due to the late unavailability of the Ayrshire player, whilst tie three also resulted in a share of the points with Nicky Sinclair and Kevin Ferguson playing out an honourable half.

Alasdair Leggate stretched Barassie’s lead to 3 - 1 with a controlled victory over David Glass by 3&2, but in tie 5 Jim Milligan, struggling with an injured arm from early in the round, crashed to a 7 & 6 defeat to Steven McBlain, to make the match score 3 - 2.

Further Ayrshire wins from Fraser McCall and Darren Mallinson over Robbie Fulker and Richard Aspin put Ayrshire in the lead, but Callum Sharp squared the match with a last green victory over Alan Connery.

In the final two ties, the Ravenspark pair of John Cairney and George Robertson secured the win for the County with wins over Stuart Miller by 4&3 and Alex Reid (5&4) respectively.

The Ayrshire Golf Association would like to record their thanks to Kilmarnock (Barassie) Golf Club for the hospitality on the day and their ongoing support towards the inter club matches, and indeed thanks all the clubs who played, or were scheduled to play the county side in the pre season series this year.

AYRSHIRE 6 KILMARNOCK (BARASSIE) 4
Posted by AJM at 9:39 pm No comments:

The event is a collegiate match, inaugurated in 1997, and contested between the United States of America and Europe.

Previous venues, in what is undoubtedly a prestige event, have included Bay Hill, Florida, The Old and New Courses at St. Andrews, The Honors Course, Chattanooga, Royal Liverpool (Hoylake), Baltusrol, Kiawa Island and Ballybunnion, amongst others.

interested junior golfers in Ayrshire are being sought to act as caddies during the event.

There will be a total of 16 caddies required, one for each competitor, and a draw will take place to match caddies with players. Caddies will remain with their allocated player throughout the 4 days of the event.


Whilst there will be a level of remuneration for those selected to caddie in the event, a greater obvious benefit to those involved will be their participation in a major event, being on the range and on the course with the best players and coaches from the European and United States colleges circuits.

There will also be the possibility of a coaching clinic, involving coaches taking part in the event, being made available to local juniors.

This event provides a great opportunity to local junior golfers to be involved in a top event with the best players.

Application forms will be available to interested juniors, through their home club convenors, in the near future, or can be requested directly by e mail from Alasdair Malcolm at

Interest in participation is expected to be high, and consequently an early return of the application forms is advised.
Posted by AJM at 12:16 am No comments: 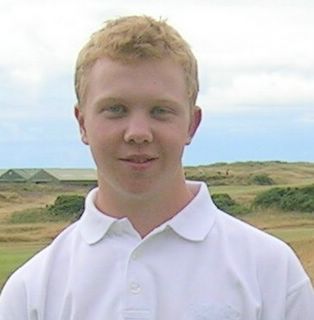 Cameron Gray (West Kilbride) helped Scotland’s young golfers to win the Boys’ Quadrangular event at St Cyprien in France this week, their first win in the event since 1995.

The Scots defeated Sweden 6-3 in the third round match, to maintain their 100% record in the tournament.

The Scots got off to a shaky start, as Cameron Gray and Newmachar’s Lewis Kirton lost the first of the morning foursomes 4&2. However, after James Byrne (Banchory) and Ross Leeds (Muckhart) defeated their opponents on the final green and Ross Kellett (Colville Park) and James White (Lundin) combined well, winning 2&1, the Scots were back in pole position.

In the afternoon, Kirton, Gray and Byrne took the first three singles matches, giving the Scots an unassailable lead.

In the end the Scots won by two clear points having won all three of their matches, while Sweden, Italy and hosts France could only muster one win each over the three days.

www.scotishgolfunion.org
Posted by AJM at 9:42 pm No comments: