The deciding match in the West Of Scotland Inter County youth league, between Lanarkshire and Dumbartonshire has been postponed again. The match is now scheduled to take place on Saturday 27th November at Hamilton Golf Club.

The deciding match in this seasons Inter County youth league, due to be played between Lanarkshire and Dumbartonshire on Saturday (13th November) has been postponed and will now take place on Saturday 20th November at Lanark Golf Club.

At the Annual General Meeting of the Ayrshire Ladies County Golf Association, held at Kilmarnock Barassie on Tuesday 9th November, former Scottish Internationalist Alison Gemmill of the Kilmarnock Barassie Club was elected an Honorary Member of the Association, in recognition of her services to golf, both within the county and on a national level.

A regular in the Scottish international teams throughout the 1980's Alison won the Scottish Ladies Championship on two occasions, beating Wilma Aitken in the 1981final at Stranraer by 2 & 1 and regaining the title in 1985 with a 2 & 1 win over Donna Thomson when the Championship was played at Kilmarnock (Barassie). In addition to her two successes, Alison also took the runners up spot in 1984 when Gillian Stewart beat her by 3 & 2 at Royal Dornoch.

Alison also enjoyed unprecidented success in the Ayrshire Ladies County Championship throughout the 1980's and 1990's, winning the title on numerous occasions.

In recent years, Alison has again "answered the call", serving as an official for Scottish International teams at various levels and at a variety of events, and it is for her contribution over the years both in Ayrshire and in Scotland that The Ayrshire Ladies County Golf Association have afforded Alison this well deserved honour.

The Ayrshire A Team finished on a winning note in this seasons West Of Scotland Inter County Leagues with victory in their rearranged match on, Saturday 13th November, against Stirlingshire at Stirling.

Despite a heavy defeat for Tommy Loy in the opening tie, Kilmarnock Barassie's two boys internationalists, David Addison and Robert McKnight hit back in the following ties to put Ayrshire in front, a lead which was further extended with a victory from Steven Spence.

Despite David Glass being defeated in the 5th tie, the Barassie duo of Stewart Macaulay and Alan Dickie ensured at least a draw for Ayrshire, with wins which took the match score to 5 - 2.

The quest for the half point required for victory was hindered by defeats for David Orchison and Steven McEwan, leaving the match score at 5-4 with one match remaining on course.

In the final match, Alastair Leggate of Kilmarnock Barassie had made great efforts to help out the side, being contacted only an hour and a half before the match was due to start, after one of the team was detained elsewhere and had to call off, but Alastair's dedication was well rewarded, his 4 & 3 victory giving the team the all important point required for a 6 - 4 victory. 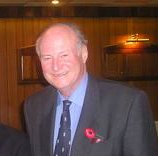 For the first time in the 36 year history of the Ayrshire Junior Golf League, the members welcomed the Captain of The Royal And Ancient Golf Club Of St. Andrews as a guest at their Annual Dinner and Presentation Of Trophies, which was held at Irvine Ravenspark Golf Club on Monday 8th November.

Also present were Andy Clift (Wilsons Sports) and Ian Walker (Ping) who generously sponsored the prizes for the Order Of Merit event which ran throughout the season.

After an excellent meal and a lengthy raffle, which attracted a large number of prizes and good support from those who attended the dinner, the evening concluded with the presentation of the trophies and awars for the season.

As has been the tradition since 1990, the presentations began with David Reynolds of The National Playing Fields Association presenting the Macrobert Thistle Junior Golfer Of The Year Trophy. This years winner, who follows a long line of "weel kent" names in Ayrshire golf, was Steven McEwan of Kilmarnock Barassie. Given the award as much for his attitude and demeanour on and off the course, as well as his performance locally and nationally, Steven had an excellent golfing year which included a number of open competition wins, success in A.J.G.L. events and representative honours at county levels. His season culminated in his selection to represent Scotland at boys level in the Boys Home Internationals.

Before presenting the remaining prizes, R & A Captain, Mr. Cole-Hamilton addressed the company, relating some stories from his boyhood golf where he began playing at the Ravenspark course before joining Irvine Bogside where the great Hammy McInally made an early impression on the young Cole-Hamilton with his kindness and willingness to pass on some tips to the next generation.

Mr. Cole-Hamilton then presented the awards to the principal prizewinners for the season, who were:

The 36th Annual Dinner concluded with a vote of thanks, proposed by A.J.G.L. Vice Chairman Douglas Aitken (Caprington). 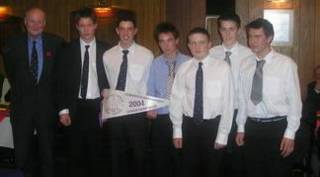 Email ThisBlogThis!Share to TwitterShare to FacebookShare to Pinterest
Ian Walker & Ian Guthrie of The Ayrshire Golf Association with the Silver Jubilee Trophy 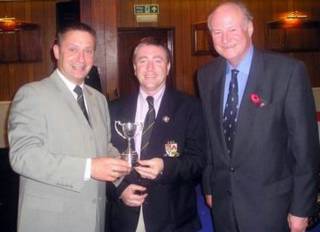 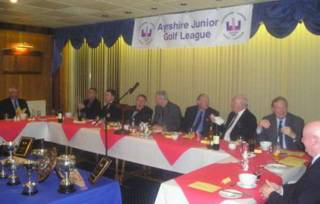 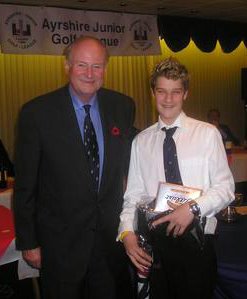 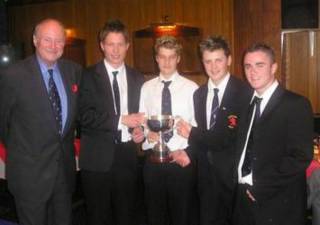 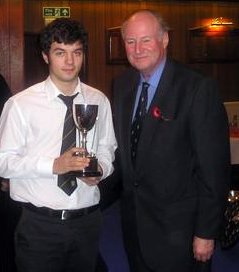 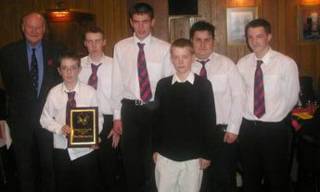 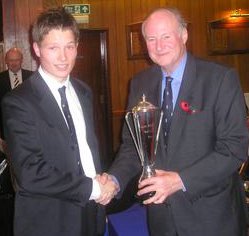 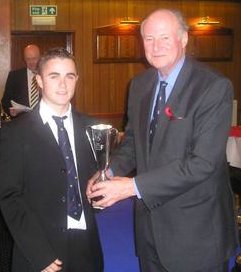 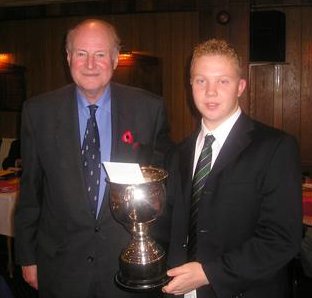 Email ThisBlogThis!Share to TwitterShare to FacebookShare to Pinterest
Ayrshire Boys Champion (and 5th equal in the Order Of Merit) - Iain Menzies (Largs) 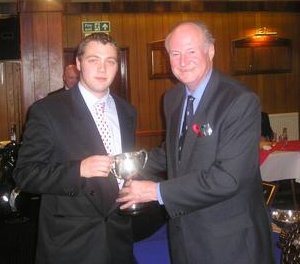 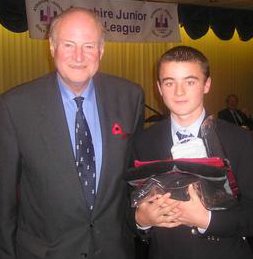 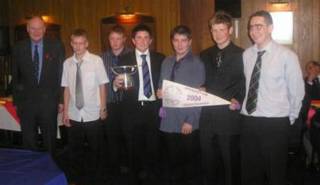 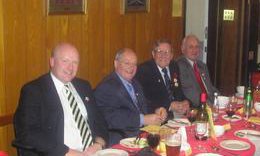 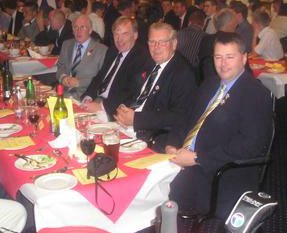 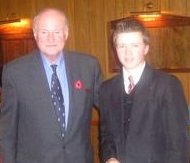 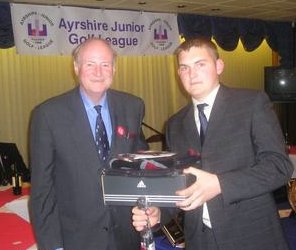 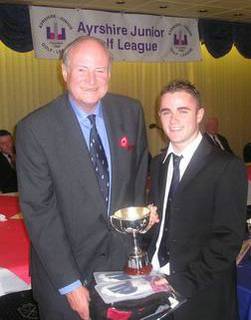 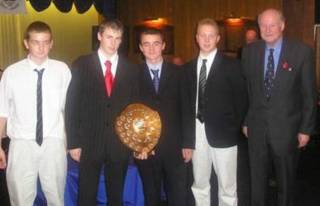 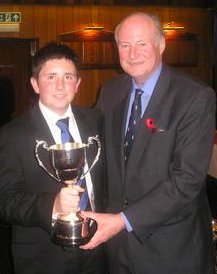 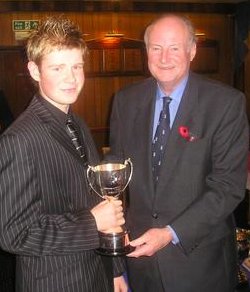 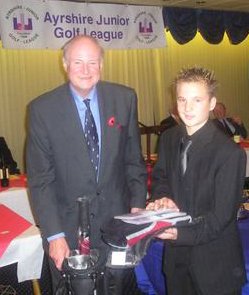 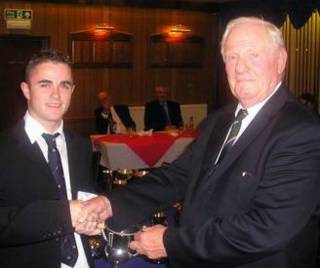 The Ayrshire A team were narrowly defeated on Saturday (6th November) by Lanarkshire, in wet conditions at Irvine Bogside, in the last scheduled week of this seasons West Of SDcotland Inter County Leagues, going down by 4.5 - 5.5.

Next saturday (13th November) Ayrshire are due to meet Stirlingshire in their rescheduled match at Stirling.

The Ayrshire Youths side came agonisingly close to claiming the draw against Lanarkshire at Drumpellier on Saturday (6th November) which would have given them the 2004 championship, but instead suffered their first defeat of the season with a 5.5 - 4.5 result in favour of the hosts.

In the early stages of the match, Ayrshire were in front, wins by John Sloan (Doon Valley), Ian Guthrie (Ballochmyle) and Garry Neil (Caprington) more than ofsetting the heavy defeats suffered by Jamie Wilson (Ballochmyle) and Graeme Gebbie (Loudoun). Defeat for Lee Hughes (Belleisle) was again offset by another fine win by Craig Hamilton (Ballochmyle), giving Ayrshire a 4-3 lead in the match.

In the eighth tie, Alastair Leggate (Barassie) was 2 ahead with three remaining, but his opponent pegged him back over the closing holes to earn a crucial half match.

Ayrshire's agony was compounded when both Cameron Gray (West Kilbride) and Jamie MacKay (St. Meddans) suffered single hole defeats in the remaining ties, to give Lanarkshire the narrowest of wins.

Lanarkshire can now take the title by defeating Dumbartonshire in their rearranged home match next week.

With Only one week remaining in this seasons West Of Scotland Inter County Leagues, the Ayrshire Youth team travel to meet Lanarkshire at Drumpellier on Saturday (6th November), knowing that a win or a draw will give them the 2004 title, after joint leaders Renfrewshire lost 6 - 4 to lanarkshire at Cochrane Castle last week.

The fixture between Lanarkshire and Dumbartonshire, scheduled for Bellshill on 16th October was postponed due to course closure.

Present positions in the League are:

In the 'A' League, Ayrshire remain in mid table with three matches from 4 played. The last scheduled fixtures are on Saturday (6th November) when Ayrshire entrertain Lanarkshire at Irvine Bogside.

With only one round of matches to play, Renfrewshire will hope to complete a 100% record when they entertain Dumbartonshire at Old Ranfurly in their final match.

Present positions in the A League are: