UNDER 16 INTERNATIONAL - Gavin in Scotland team for Pannal 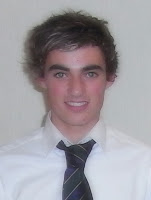 Blair Gavin (Kilmarnock Barassie) is one of the 10 strong scotland team for the annual Under 16 international against England, which is scheduled to be played on Sunday 7th October at Pannal GC near Harrogate in Yorkshire.

The full Scotland team is :-


Jack McDonald has capped the most wonderful year of his young golfing life after being crowned the Scottish Amateur Golfer of the Year for 2012.


The Kilmarnock (Barassie) teenager has enjoyed a superb season, admitting it’s been “storybook stuff”, to come out on top in the annual standings.


McDonald, a maths student at the University of Stirling, follows in the spike marks of previous recipients of the Amateur Golfer of the Year accolade, including Dean Robertson, Steven O’Hara, Richie Ramsay, Callum Macaulay and last year’s winner, Michael Stewart.


Graeme Robertson from Glenbervie also enjoyed a fine season this year, domestically and internationally, to finish runner-up in the standings but it was McDonald who took the spoils as the leading Scot on the World Amateur Golf Ranking at the cut off point earlier this month.


“I definitely look back on an awesome year,” he said. “I got a lot of experience, not just the amateur events but professional events too. It’s brilliant to now win this award.”


The 19-year-old, a former SGU National Boys’ Squad member, started his season impressively by claiming the British Universities Men’s title before finishing tied third at the Golf Data Lab Scottish Youths Championship at Ladybank in May.


However, it was at The Amateur Championship at Royal Troon and Gailes Links in June when his year really caught fire. Playing in front of home crowds in Ayrshire, McDonald went on a glory run to the semi-finals, before his hopes were ended by Austrian Matthias Schwab.


McDonald’s still reaped rich reward, rocketing up the world rankings and gaining an invite to the Aberdeen Asset Management Scottish Open at Castle Stuart on The European Tour. In elite company, McDonald excelled to play all four rounds – brilliantly chipping in on the 18th to make the cut – and played on the final day with Ernie Els, winner at The Open the following week.


McDonald also earned a place in the Johnnie Walker Championship at Gleneagles, before his season ended on a high representing Scotland for the first time in the Home Internationals at Gailes Links. Collecting four-and-a-half points, McDonald was among the heroes as the Scots won the annual four nations battle for the first time in six years.


“It’s been quite a whirlwind,” said the 2009 Scottish Boys Stroke Play champion. “I was playing really well at the beginning of the year and things just kicked on from there, everything clicked.


“I moved up around 360 places in the world rankings on the back of The Amateur, it was crazy. The schedule I had changed completely as well, like getting invited to play in the Scottish Open.


“Castle Stuart was a bit surreal and it topped off the run I was having. Getting drawn with Ernie, then he went on to win the next week – it was kind of storybook stuff. I chipped in as well to make the cut, which doesn’t happen too often.


“Gleneagles was good too as we don’t play a lot of that sort of golf, a long parkland course. We are used to the links, so it was good to learn what I need to improve for that type of golf as well.”


McDonald, who just missed out on selection to represent Scotland at the World Amateur Team Championship in Turkey next month, will pick up his prize at the glittering Scottish Golf Awards in 2013. Already, he is looking to achieve more next year.


“I’ll look to do the same things with Dean Robertson (High Performance Golf Coach) at the University of Stirling and with the SGU. Hopefully I can have an even better season next year,” he added.

The final was played in excellent conditions with both teams producing some sparkling golf in the final which was completed in the most sporting manner.

With Robert Marshall the low man off his 3 handicap, the other finalists George McCulloch (7), David McCulloch (8) and Phil Rooney (15) received some shots in the match.

Another birdie three at the fifth hole increased the Brunsston Castle lead to two holes, a margin they maintained until the ninth where the Beith duo pulled one back to turn for home one behind.

At the 10th the McCulloch's restored their two hole advantage again and a nett birdie at the twelfth saw the Brunston Castle lead increase to three holes with six to play.

At the thirteenth hole, Robert Marshall produced a superb approach shot to the green which came to rest just three feet from the hole to set up a winning birdie three and reduce the defisit to two holes once again.

The 185 yard par three thirteenth hole was playing into a difficult cross wind and only George McCulloch of Brunston Castle found the green from the tee, his ball coming to rest eighteen feet below the hole. With the other three players still outside him in two shots, George McCulloch looked favourite to win the hole before Robert Marshall holed a superb 25 foot put from the back of the green for a par three. marshall was followed in for par by David McCulloch from around  twelve feet and, not to be outdone, George McCulloch duly holed his eighteen foot putt for a birdie two to restore his team's three hole advantage.

With only four holes remaining, the Beith duo needed to produce the same kind of magic that had seen then fight back from dormie five down in a previous round to win at the third extra hole, and Robert Marshall gave his team a chance with a superb second shot to the green which finished five feet to the left of the hole. With Rooney out of the hole and George McCulloch struggling, it was down to David McCulloch to keep the pressure on. With a stroke at the hole, david McCulloch came up short with his approach but his chip finished a few inches inside Marshall's ball in three, nett two.

First to go, Marshall hit his putt on line but was wanting a little on pace and saw his birdie attempt pull up agonisingly less than an inch from the  hole.

Facing a four and a half foot putt for the championship, david McCulloch made no mistake, confidently holing his putt for a nett birdie three and a 4 & 3 victory for Brunston Castle.

Despite the disappointment of losing out at the final stage, marshall & Rooney will have the opportunity to go one better next year, having qualified to represent their club in the 2013 competition, as indeed have the new champions from Brunston Castle.

At the conclusion of the final, Ayrshire Golf Association Past President Alasdair Malcolm (Prestwick St Nicholas) presented prizes to both teams and handed over the Ayrshire Fourball Trophy to the 2012 champions, George & David McCulloch of Brunston Castle

The Girvan team of  Gary Bryden, Stephen Stamper & Stuart White, who won the Ayrshire title at Irvine GC in July, will be bidding to become the third Ayrshire club in four years to take the national title after the successes of Prestwick GC in 2009 and Ballochmyle GC in 2011.

Tee times for the championship are :-