Ayrshire's Jack McDonald has joined International Sports Management and will move to the professional ranks next week. 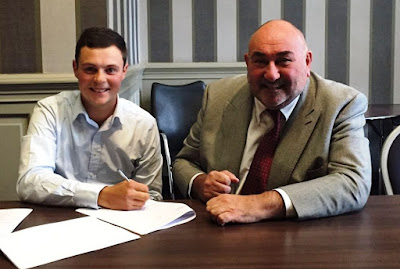 Jack McDonald signs on the dotted line for Chubby Chandler, boss of ISM

(Report from the www.scottishgolfview.com website)
NEWS RELEASE FROM ISM

The 23-year-old’s stellar amateur career culminated with him winning two-and-a-half points from a possible three in Great Britain and Ireland’s Walker Cup win over the United States last year.
He will make his professional debut at the final stage of EuroPro Qualifying School at Frilford Heath, starting on April 6.

Jack hopes to split his time between the EuroPro Tour, MENA Tour and Challenge Tour in the year ahead.

He is also excited to be the latest promising youngster to join ISM, which has nurtured the careers of Louis Oosthuizen, Darren Clarke, Lee Westwood, Danny Willett, Matt Fitzpatrick and Ben An.

Jack said: “I’ve done a lot in the amateur game now. I think I’m ready to make the transition and that my game is there so I’m looking to just keep improving.

“There are plenty of great names that have thrived at ISM and the opportunity is there. You can’t ask for any more than that and I’ll definitely benefit from working with Chubby and the team.”

As well as a host of individual titles, Jack helped Scotland win the European Nations Cup and Europe take the Palmer Cup in 2014.

After his role in Scotland’s European Men’s Team Championship victory last year, he followed in the footsteps of his grandfather Gordon Cosh by playing in the Walker Cup success at Royal Lytham and St Annes in September.

ISM Chief Executive Officer Chubby Chandler said: “I saw Jack playing at the St Andrews Links Trophy and have been following his progress.

“He’s got a lot of potential and I’m confident we can help him achieve his dreams in golf.”
Posted by AJM at 12:06 am