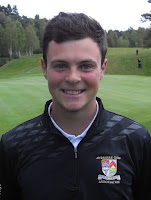 Ayrshire's Jack McDonald marked his professional debut with a one-under-par round of 71 as he and Paul McKechnie (Braid Hills) led the Scottish chase for one of the top 30 places at the end of the 54-hole PGA EuroPro Tour Final Qualifying School at Frilford Heath Golf Club, Oxfordshire.

By COLIN FARQUHARSON - courtesy of the www.scottishgolfview.com website)
McDonald birdied the fifth, eighth and 17th and dropping shots at the first and 18th.McKechnie, a winner on the EuroPro Tour in the past, birdied the first, third, fifth and 16th in halves of 34 and 37.
The two Scots are tied for 11th place, three behind the English leader Billy Downing (Truro) who had a 68

Nicol shot a par 72, birdieing the ninth, 15th and 17th to be tied 21st in the field of 240
Aberdeen-born Cormack has played the American mini-tours for the last few years. He also had a 72, coming home in 33.

Cousins Craig and Sean Lawrie are walking a tightrope. Only the leading 80 and ties at the end of the second round will go forward to the final 18 holes.