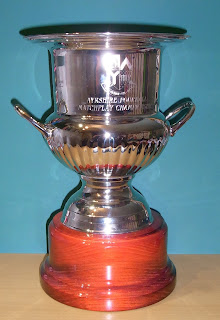 The week has been busy in the Ayrshire Fourball Championship, with a number of first round ties being completed over the last few days.

Rab McKell & Neil Cairns (Loudoun) are also through to the second round after a 3 & 2 home win over Kenny Milliken & David Power (Troon St Meddans). The Loudoun duo are away to either Glacier or Drongan in round two.

Steven Wells & Gordon Storrar (Irvine) beat their visitors David Mitchell & Alan Baillie (Largs Routenburn) to secure a visit to Ballochmyle in the next round.

Billy Dumigan & Ryan Watson (Stewarton) travelled to play Vince Gilligan & Michael Henderson (Troon Portland) in the opening round and won by 3 & 2, booking another away game i9 the second round at either Troon Welbeck or Irvine Ravenspark.

The other first round tie played this week saw Robert McClure & Scott Brown (Kilbirnie Place) secure a home tie in round two against Girvan, following a one hole victory away from home in their opening tie against Steven Gillies & Ian Morrison (Prestwick St Cuthbert).

The remaining four first round ties have to be completed by Sunday 24th April.
Posted by AJM at 12:15 am