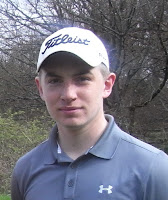 Sweeney made short work of his tie against Lyle Murdoch (Kings Acre), taking only thirteen holes to end the match with a 6 & 5 win.

Sweeney now faces Ryan Morrison from Windlesham Golf Club in Surrey in the third round on Wednesday afternoon.

The other two Ayrshire players still in the championship, Jack Broun (Ayr Belleisle) and Alyx Murray (Troon Welbeck) are due to complete their second round ties in the early afternoon and, if successful, face a second match of the day in the third round later in the day.
Posted by AJM at 11:27 am