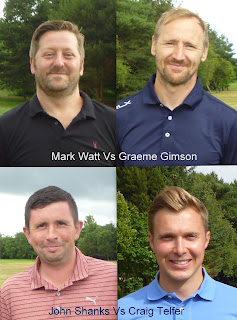 Three Prestwick St Cuthbert players are through to the semi finals of the 2021 Ayrshire Matchplay Championship, after the quarter final ties were played on Tuesday the 6th of July over the St Cuthbert course.

In the first match out Graeme Gimson (Prestwick St Cuthbert) took on Blair Morton (Royal Troon)The match was all square through six but Graeme Gimson won the next two holes, only for Brair Morton to hit back immediately, taking the following two holes to square the match after ten. At the eleventh Blair Morton just cleared the trees on the right from the tee and played a magnificent second to find the green, the ball coming to rest 20 feet from the cup. Graem Gimson was not to be outdone though, hitting his second from the left rough to five feet from the pin before holing his put for a winning birdie three. Graeme Gimson doubled his advantage at the twelfth, and when Blair Morton found trouble at both the thirteenth and fifteenth holes, the match ended in Graeme Gimson's favour by 4 & 3.

Second out was the tie between John Shanks (Irvine) and Kevin Thomas (Prestwick St Cuthbert). John Shanks raced to a three hole lead after six and by the eleventh hole, where Kevin Thomas was wide of the green with his approach, found heavy rough and could only make a bogey, the concession of John Shanks' 15 foot birdie putt left John Shanks dormie six. At the twelfth, Kevin Thomas' approach was 22 feet short of the hole whilst John Shanks' second came to rest just twelve feet from the hole. When Kevin Thomas left his birdie putt on the lip of the hole, the players shook hands on a 7 & 6 victory to John Shanks.

Craig Telfer (Prestwick St Cuthbert) and  Barry O'Rourke (Loudoun) were the penultimate quarter final tie out and were involved in a really competitive match. Barry O'Rourke had a storming start, opening with three birdies to take a two hole lead but, with successive birdies at the fifth and sixth, Craig Telfer turned the match around to lead by one going to the seventh. Further birdies at the eighth and ninth gave Craig Telfer a two hole advantage after ten holes and he further pressed home his advantage by taking the eleventh and twelfth to go four up with six to play. By the time the match reached the fifteenth hole Craig Telfer was dormie four, but to Barry O'Rourke's credit he bravely holed his birdie putt from 20 feet for a winning birdie to take the tie to the sixteenth hole. At the sixteenth, Barry O'Rourke looked favourite after the tee shots, where he was just off the fairway on the right, whilst Craig Telfer blocked his tee shot right and was very fortunate to find his ball in very heavy rough, though he could only move his second shot forward in the light rough, about thirty yards short of the green. Barry O'Rourke played a good second to the centre of the green, but Craig Telfer piled on the pressure with a superb third shot to within four inches of the hole, for an unlikely par four, leaving Barry O'Rourke needing to hole another eighteen fooyt putt for birdie to keep the game alive. In the event, Barry O'Rourke's birdie putt pulled up short, giving Craig Telfer the semi final place with a 3 & 2 victory.

The final match on the course featured Mark Watt (Prestwick St Cuthbert) and defending champion Michael Smyth (Royal Troon). Mark Watt went two up after five holes, but when his 3 foot par putt at the sixth lipped out, the advantage was reduced to a single hole. This heralded a fightback by the title hoolder and by the tenth Michael Smyth had turned a one hole deficit into a one hole lead, which was maintained until Mark Watt birdied the thirteenth to square the match once again. By the sixteenth the players could still not be separated and a half in fours there took the match to the penultimate hole all square. At the seventeenth mark Watt's tee shot finished ten feet short of the hole whilst Michael Smyth's effort was about eighteen foot away on the left edge of the putting surface. Michael Smyth's birdie putt shaved the right edge of the hole but stayed above ground, whilst mark watt's effort overhung the right edge of the cup for a few seconds before dropping in for a winning birdie two, to go one ahead with one to play. At the final hole Mark watt blocked his tee shot, which came to rest in the rough to the left of the eighth fairway, between trees and a large bush, whilst Michael Smyth's tee shot was in fine position on the right side of the fairway. With no clear shot back to the eighteenth fairway, Mark Watt played his second up the eighth and, whilst Michael Smyth's second came to rest in the right rough, some thirty yards from the green, Mark Watt recovered well, his third reaching the apron at the front of the final green. Michael's Smyth's approach came to rest on the front part of the green, leaving him a fifteen foot birdie putt, whilst Mark Watt's fourth, a putt from just off the green, stopped three feet short of the hole. Michael Smyth's birdie putt, to ensure the match went to extra holes, missed the right side of the hole and mark Watt took full advantage, holing his par putt to halve the final hole and go through to the semi final with a single hole win in the tie.

The semi final line up on Wednesday the 7th of July is :-