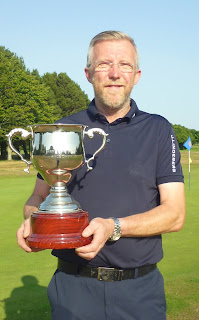 The 2021 Ayrshire Seniors Champion, Alastair Travers (Irvine Ravenspark), was presented with his trophy this week, after his victory in the championship at Rowallan Castle earlier in July.

Out in the second group of the day, Alastair went round in 78, giving him a nett score of 70 off his eight handicap, which ultimately took the Sandy Provan Trophy for the best nett score of the day, by virtue of the better inward half over Michael Steel (Ayr Seafield)

In winning the trophy, Alastair became the third Irvine Ravenspark member to take the title, following on from Ronnie Potts in 2008 and George Millard in 2010.