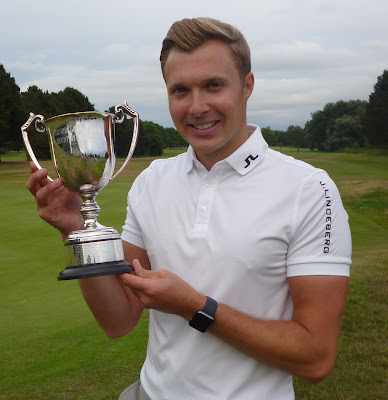 Craig Telfer of Prestwick St Cuthbert Golf Club is the 2021 Ayrshire Matchplay Champion, after he won an outstanding final against his clubmate Graeme Gimson, over their home course on Thursday the 8th of July at the second extra hole.

The first players from the same club to contest the final since Troon Welbeck's Stephen Murray and Ross Milligan contested the title 14 years ago, the two Prestwick St Cuthbert players were bidding to be only the second winner from the club in the 53 year history of the event, following on from former Scottish internationalist David Murdoch's win 39 years ago, in 1982.

Craig Telfer got off to the best possible start, holing from 7 feet for a birdie three at the first and taking the lead, after Graeme Gimson's 6 foot birdie attempt lipped out.

After halving the second in par, both players hit good tee shots at the par five third hole. Playing first, Graeme's 185 yard approach was pulled slightly left of the green, beyond the greenside bunker that Craig''s ball came to rest in, after he hit a similar, but shorter, approach from 175 yards. Playing first, Craig hit a superb recovery from the hazard, his ball finishing 4 inches from the hole to give him his second birdie in the opening three holes. Graeme's chip finished 2 feet from the cup and he successfully converted his putt for a birdie four to half the hole.

The fourth hole was halved in par, Craig again getting up and down from a greenside bunker, and at the fifth Craig could only make a bogey 5 after his tee shot finished in trees on the left, and conceded the hole to Graeme, who was safely on the green not far from the hole in 2, to square the match.

Both players found the right of the fairway at the sixth. Playing first Graeme saw his approach go long and left, leaving him on the apron at the back of the green, 30 feet from the hole, whilst Craig played an excellent second to within 3 feet of the hole to set up a winning birdie three and restore his one hole advantage.

After missing the green at the short seventh from the tee, Craig chipped up to 1 foot past the pin to secure his par, but it wasn't enough to maintain his lead as Graeme holed from 14 feet for a birdie two to square the match once again.

At the par five eighth hole, Graeme hit a perfect tee shot, leaving him 225 yards from the green whilst Craig pulled his tee shot a little and was fortunate to stop just short of heavy rough and trees on the left, some 230 yards from the green. Craig's second clipped some overhanging tree branches and came up 60 yards short of the green on the left, leaving him needing to execute a low punched approach under overhanging branches with his third. Graeme's second was unfortunate to find a difficult lie on the front face of the greenside left bunker, and after Craig played a good shot to reach the putting surface in three, some 30 feet short of the hole, Graeme played a fine chip which came to rest 10 feet past the hole, leaving him a right to left putt for birdie. Craig then played a killer blow, holing his uphill put from the front of the green for an excellent birdie four, and when Graeme's attempt slipped pas the hole on the high side, Craig went one ahead in the match once again.

At the short ninth hole, the to and fro nature of the match continued. With the pin in a difficult position on the lower tier of the green, Craig just missed the putting surface on the left from the tee, and when his approach putt pulled up 6 feet short and he failed to convert the next putt for a par, he conceded Graeme's birdie putt from 3 feet to leave the match all square as the players turned for home.

With some excellent play over the outward half, Graeme and Craig covered the first nine in figures of 4 under and 2 under par respectively.

The inward half began with a couple of holes halved in pars but at the twelfth it was Graeme's turn to hole a fine putt from 22 feet for a winning birdie three, and the lead in the match for the first time, after Craig's birdie effort from 18 feet slipped past the left edge of the hole.

After a fine tee shot at the thirteenth, Craig found the green in two and secured a comfortable par four, but Graeme maintained his advantage, despite his drive running into heavy rough on the left, when he played a good recovery then chipped and putted for his par.

Playing first at the short fourteenth, Graeme's tee shot ran just of the back left of the green, some 30 feet from the hole and although he secured his par, it wasn't enough to stop Craig squaring the match once again, his tee shot bouncing once before checking and coming to rest just 8 feet short of the hole, from where he successfully converted his putt for a winning birdie two.

At the fifteenth the players adopted different strategies from the tee, Craig hitting a three wood up the right to leave a 150 yard approach to the green, whilst Graeme went with driver and, though a little further right than he intended, left himself a shorter approach by some 20 yards. Both players secured two putt pars and moved to the sixteenth all square, where Craig's tee shot finished in the rough on the right of the fairway at the corner of the dog leg, whilst Graeme was some 40 yards further on from the tee, leaving him an approach of about 60 yards. Craig's approach went past the pin, coming to rest 20 feet beyound the hole and leaving him a downhill birdie putt, whilst Graeme's effort finished 6 feet past the hole. Craig's birdie attempt missed the hole on the left side, and Graeme took the initiative, holing his birdie putt to take a one hole lead with two to play.

Playing first at the penultimate hole, Graeme saw his tee shot drift into the front right greenside bunker whilst Craig's tee shot came to rest pin high, 12 feet to the left of the cup. Graeme played a fine bunker shot to within 11 feet of the hole but to no avail as Craig holed his putt for a birdie two, to take the hole and square the match.

At the final hole of regulation play, a 488 yard par five, Craig's tee shot drifted left and came to rest just short of heavy rough, some 220 yards from the green whilst Graeme was in perfect position on the right of the fairway about 215 yards from the putting surface. Craig executed and excellent iron shot for his second, his ball running up to within a couple of yards of the front edge of the green, 40 feet from the hole. Graeme's approach was pulled a little left, and came to rest to the left of a greenside bunker on the left of the green, a very similar distance away from the hole as his opponent. Playing first, Craig Telfet rolled his approach putt a couple of feet past the hole, leaving him a short putt for birdie and piling the pressure on Graeme who faced a difficult chip over the bunker, with little green to play with between the shoulder of the hazard and the hole. Despite the pressure of the situation, Graeme produced what was probably the finest shot in an exceptional match, his soft, high lob being executed almost perfectly, coming to rest just one inch short of the hole and ensuring a closing birdie four. Craig confidently holed his remaining 2 foot putt to match Graeme's closing birdie, half the match, and take the championship decider into extra holes.

At the first extra hole Craig played a perfect iron from the tee, leaving him an approach from 120 yards, which he hit to pin high, 6 feet right of the hole. Though Graeme hit a good tee shot, hs ball drifted into the left rough, near to trees, and his problems were compounded when his ball came to rest in a divot. Despite the difficulties f the lie, and overhanging trees, he played an excellent approach, his ball finishing just off the green on the left, leaving him a downhill, left to right, 13 foot putt from the fringe for a three. His birdie effort shaved the right side of the hole but stayed above ground, leaving Craig with the opportunity to close out the match. Despite hitting a good putt, Craig's effort slipped past the right side of the hole, and the match went on the the second extra hole.

At the 20th Craig hit an iron from the tee, his ball coming to rest in the right semi rough short of a fairway bunker, which left him a 150 yard approach to the green. Graeme's tee shot with a wood left him with a 120 yard second shot from the left side of the fairway. Both players pulled their approaches a little but both found the back left of the green, Craig leaving a putt of 24 feet, with Graeme just a couple of feet closer in two. Putting first, Craig's putt moved a little left to right before dropping into the cup for a decisive birdie three and though Graeme made a brave effort to match Craig's effort, his put slipped past the hole on the right and the title was Craig Telfer's after an epic final tie, enjoyed by a good number of socially distanced spectators.

At the conclusion of the championship the Ayrshire Golf Association President John W Watt thanked the host club and its members for not only hosting the event. but also facilitating its rescheduling following postponment earlier in the season due to COVID restrictions, and praised the greenkeeping staff for the excellent course presentation throughout the week, before presenting prize vouchers to both finalists and handing over the Ayrshire Matchplay Championship trophy, and commemorative medal, to the 2021 winner Craig Telfer.