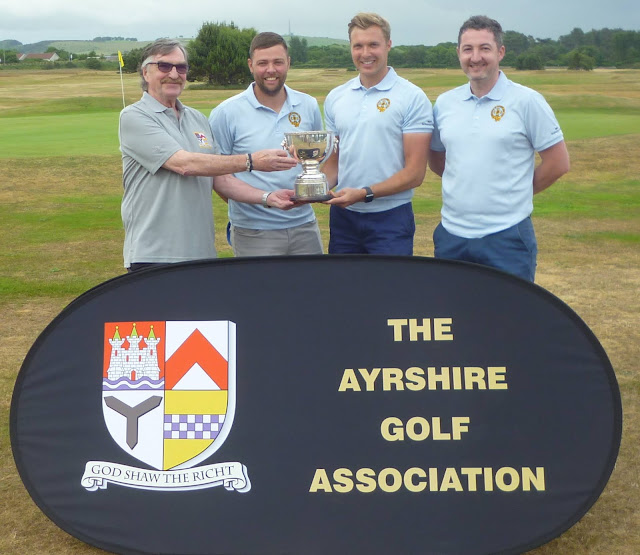 Prestwick St Cuthbert Golf Club are the 2021 Ayrshire Club Champions, winning the championship over the Troon Lochgreen course on Sunday the 4th of July, by a single shot.

The St Cuthbert team was lead by Craig Telfer who was in the team when the club won the R. Leslie Crawford trophy on the only previous occasion, in 2016.

As the competition drew to a close four team three teams had posted a best two scratch scores from three total of 144 and the first to edge into the lead was defending champions Irvine Golf Club, whost first two scores, by John Shanks (68) and Darren Mallinson (75) gave them a total of 143 with one score still to be returned.

Attention now turned to Irvine's final player on the course, George Robertson, who, by virtue of Adam Sweeney's 74 as Prestwick St Cuthbert's third score which would be the deciding factor if the two teams were matched on 142, needed a 73 or better for Irvine to retain the trophy. Despite a valiant effort, just missing a putt for an eagle three on the final green, George Robertson could do no better than to match team mate Darren Mallinson's 75, which left Irvine in the runners up spot on 143.

John Shanks' 6 under par score of 68 took the voucher for the best return of the day, just pipping Alan Kelly (West Kilbride) by virtue of the better inward half.

Ayrshire Golf Association President John W Watt, himself a member of Prestwick St Cuthbert, presented the R.L. Crawford trophy to the winning team at the conclusion of the championship.