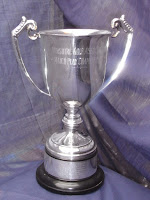 Prestwick St Cuthbert golfers feature in all four quarter final ties in the 2021 Ayrshire Matchplay Championship, being held over the St Cuthbert course this week, following completion of the first round matches on Monday the 5th of July.

After providing five of the sixteen qualifiers, the host club's interest was maintained, with the only casualty being one of the players involved in an all St Cuthbert first round tie.

First match out on the course featured title holder Michael Smyth (Royal Troon) and Alan McLean (Largs). Despite losing the first hole of the match, Michael Smyth produced some excellent golf for the remainder of the evening, running out a winner by 7 & 6 with figures of six under par for the round over the 12 holes played in the match.

The second tie out featured 2016 trophy winner John Shanks (Irvine) and Stuart Miller (Kilmarnock Barassie). The match was close throughout, being all square at the turn, but John Shanks edged ahead and when the sixteenth hole was halved in 4's, he was dormie two. Ay the par three seventeenth, John Shanks was long and left from the tee and chipped his ball 6 feet past the hole in two, whilst Stuart Miller was bunkered left from the tee, but played an excellent bunker shot to 2 feet from the hole. When John Shanks missed his par put to the left of the hole, Stuart Miller took full advantage, holing his putt for a three to take the tie down the last. At the final hole however, John Shanks secured the necessary halved hole to win the tie by a single hole.

Third out was John Haggarty (Loudoun) and Blair Morton (Royal Troon). Blair morton took the early initiative, carving out a three hole lead after eight, and this advantage was maintained to the sixteenth where he was dormie three. At the sixteenth Blair Morton was long and right with his second shot when John Haggarty hit his second onto the green, where it hit the pin and finished four inches from the hole, which earned him a winning birdie three to take the match to the seventeenth. At the penultimate hole, John Haggarty was through the green to the rear left from the tee whilst Blair Morton found the putting surface from the tee.  Playing first, Blair Morton rolled his putt up close to the hole prompting a conceded par. Needing to hole his chip shot to take the match down the last, John Haggarty made a valiant effort, but his chip ran past the hole and stayed above ground, giving Blair Morton a 2 & 1 victory in the match.

In the fourth tie out, featuring Barry O'Rourke (Loudoun) and Greg Vernon (Kilmarnock Barassie), it was Barry who took the early advantage, with a three hole lead after eight. Still three ahead playing sixteen, Barry O'Rourke was well placed from the tee whilst Greg Vernon found the trees on the left with his tee shot, and took two further shots to reach the green, leaving him with a fifteen foot putt for his par. Barry O'Rourke hit his second shot to eighteen feet from the hole and although he missed his birdie putt to the right of the hole, a par four was secured and the match was won by 3 & 2.

Daniel Forbes (Irvine) and Mark Watt (Prestwick St Cuthbert) were all square at the turn, Daniel winning the ninth to square the match, and the due were still all square playing the penultimate hole of the tie, the seventeenth. Whilst Daniel Forbes was long and left from the tee, mark watt found the green with his tee shot, with a 20 foot putt left for a birdie two. Daniel Forbes chipped to 18 feet, but after Mark Watt missed his birdie putt to the right and secured a par three, Daniel Forbes missed his par putt to the left of the hole and Mark Watt went to the final hole one up. Mark Watt confirmed his place in the quarter finals by winning he final hole of the match for a two hole victory.

The sixth match out was an all Prestwick St Cuthbert affair featuring Kevin Thomas and 2009 winner Scott Brown. The match was all square after eight holes but by the sixteenth Kevin Thomas was dormie three. At the sixteenth, Scott Brown found trees on the right from the tee and in attempting to play out of the trees towards the green, his ball struck trees before being lost. Despite a search by players and spectators, the ball remained lost and Kevin Thomas progressed to the quarter finals with a 4 & 2 win.

Last match to tee off in the opening round was the tie between Robbie McFarlane (Caprington) and Graeme Gimson (Prestwick St Cuthbert).Graeme Gimson held a two hole advantage after eight and continued to take hold of the match in the inward nine, running out victorious by 4 & 3.

The final match on the course proved to be an extremely tight and competitive tie between Craig Telfer (Prestwick St Cuthbert) and Sandy Walker (Kilmarnock Barassie). Craig Telfer held a two hole advantage after eight holes, and when Sandy Walker pulled his par putt from 6 feet at the sixteenth, and Craig Telfer holed from 3 feet, the St Cuthbert player was dormie two. At the seventeenth both payers were bunkered left from the tee but Craig telfer was unable to secure his par putt from 15 feet and Sandy Walker bravely holed his from 6 feet to take the tie down the last hole. At the final hole, Sandy Walker was perfectly placed from the tee and his second with a fairway wood finished level with the green, just to the left of a greenside bunker. having blocked his tee shot right over trees at the final hole, Craig Telfer found a reasonable lie in the rough to the side of the eight fairway. Blocked out from playing directly to the green, Craig Telfer played his second up the eight fairway before playing his approach over trees to the green, to within 20 feet of the hole. Sandy Walker's chip over the bunker ran up to 5 feet short of the hole and when Craig Telfer's birdie attempt pulled up short of the hole, Sandy Walker again showed his competitive mettle, holing his 5 foot birdie putt to take the tie into extra holes.

At the first extra hole Sandy Walker's tee shot was safely negotiated, coming to rest on the right side of the fairway, whilst Craig Telfer played a stunning iron shot from the tee on the perfect line up the left which left him just 100 yards from the hole. Sandy Walker's approach found the left greenside bunker whilst Craig Telfer's approach finished just 6 feet left of the hole. Sandy Walker 's bunker shot came to rest just outside 6 feet from the hole and he bravely holed for a par four. Despite hitting a good putt, Craig Telfer saw his birdie attempt slip past the right of the hole and the match carried on to the second extra hole.

At the second extra hole, rolls were reversed when Sandy Walker's perfect tee shot was followed by an approach shot which came to rest 8 feet to the left of the hole. Craig Telfer found the left rough from the tee, adjacent to a line of trees, and as a result had to play a low punched approach which came to rest short and right of the green. Craig Telfer then chipped up to just under 8 feet from the hole, and when Sandy Walker missed his birdie putt to the right of the hole, it was Craig Telfer's turn to show his battling qualities, holing his par putt to take the match to the 21st hole.

The quarter final line up is:-