UNIVERSITY GOLF - Award for Euan Walker in the U.S.A 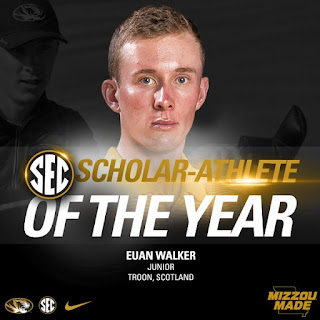 Walker was named Southeastern Conference Scholar-Athlete of the Year on Wednesday, May 4, as selected by a panel of coaches in the Conference.

Walker has been a force for head coach his University Of Missouri golf team, the Tigers, on the course and in the classroom, compiling a 4.0 cumulative grade point average in mathematics while appearing in his golf team lineup for the entire 2015-16 season.

Walker proved to be one of the team's most consistent golfers this season, recording a 73.4 stroke average, good enough for second-best on the squad.

He was the Tigers' first or second-best finisher in six of the teams 10 events during the 2015-16 campaign.


The honour is the second conference recognition in Walker's career, as he earned a place on the Southeastern Conference All-Freshman Team as a newcomer in 2013-14.
Posted by AJM at 11:32 pm