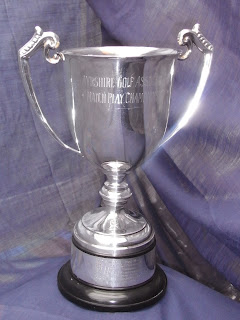 The quarter finals of the 2016 Ayrshire matchplay Championship were completed at Western Gailes on Tuesday night, 3rd May, with players enjoying slightly less breezy and slightly warmer conditions that the previous evening.

Three opening pars and a birdie three at the fourth hole saw Hamilton take a three hole lead early in the match but a par four at the fifth and a birdie four at the following hole allowed Thomas to reduce the deficit to one by the turn.

The inward half proved tight with only two holes exchanged by the sixteenth, leaving hamilton still one in front. A birdie three at the sixteenth saw Thomas square the match for the first time since the opening hole, but hamilton finished with successive pars over the closing two holes and this was enough for him to win both holes for a 2 hole win in te match and a place in the semi finals.

The second match out was between Graeme Gimson (Prestwick St Cuthbert) and John Shanks (Irvine).

The players matched each other over the opening three holes but a birdie three at the fourth followed by a concession at the fifth gave Shanks a two hole advantage. The next two holes were exchanged before a further concession saw shanks a three hole lead after eight.

Shanks could only manage a bogey five at the ninth which allowed Gimson to reduce the deficit to two holes at the turn.

Gimson took both the twelfth and fourteenth to square the match, only to fall behind again when Shanks had a birdie two at the fifteenth. With both players finishing with three successive pars over the closing holes, Shanks secured a narrow victory by one hole and progressed to the last four.

Some erratic driving early on from Hedger saw Smyth lead by three after four holes played but a lost ball by Smyth at the sixth allowed hedger to reduce his lead to two and a winning par four at the ninth by hedger saw the players turn for home with Smyth one ahead.

A par four at the eleventh was good enough for Hedger to win the hole and square the match and the two players matches each other over the next five holes to leave them still all square with two to play. At the seventeenth, Hedger was through the back in two whilst Smyth played an excellent approach to the centre of the green. Hedger chipped on but could do nothing more as Smyth holed his putt for a winning birdie three and a one hole lead with one to play.

Hedger hit an enormous drive at the 377 yard closing hole, to within yards of the green, but was unable to get up and down for the birdie needed to win the hole and take the match into overtime, with Smyth matching Hedger's closing par four to win the tie by one hole.

One under par after five holes, for the second successive evening, saw Orton lead by four and although a superb birdie four by McLean at the sixth reduced Orton's advantage to three holes, the Barassie player restored his four hole lead at the seventh with a winning birdie two.

At the eighth Orton found the burn with his second despite a good bunker shot and the resultant bogey five allowed McLean to reduce the lead to three once more, only to see Orton finish the half with another birdie three to restore his four hole advantage at the turn.

Despite playing good golf, Alan McLean found himself with a mountain to climb in the inward half following Orton's impressive scoring over the front half, where he reached the turn in two under par figures.

Orton let some shots slip over the opening three holes of the inward nine and McLean took advantage, winning the tenth and twelfth to reduce the deficit to two holes, but a solid par three from Orton at the thirteenth after McLean had found a bunker from the tee allowed Orton to stem the flow and restore a three hole advantage with five to play.

The fourteenth was halved in par fives, both players hitting the hole with their birdie attempts, and at the fifteenth, McLean again showed his mettle, takign the hole with a winning par three after Orton was bunkered from the tee.

Two up with three to play, Orton produced his best drive of the night at the sixteenth, splitting the fairway and leaving himself a short chip from the green whilst McLean found a bunker on the left of the fairway from the tee.

With McLean unable to make better than five and Orton safely on the green in two, Orton rolled his birdie attempt to the hole side, prompting a conceded four by McLean, and giving him a 3 & 2 victory in the tie.

The semi finals take place on Wednesday 4th May at Western Gailes, with a 5.00 p.m. start

The semi fnal line up is :-