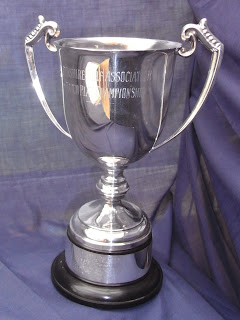 The first round matches in the 2016 Ayrshire Matchplay Championship were completed on Monday evening, 2nd May, at a cold and breezy Western Gailes.

After both players opened with par fours, Hamilton took the lead at the second and by the sevent hole had forged a four hole advantage which he maintained to the turn thanks to excellent level par scoring for the front nine.

Telfer took two of the opening three holes in the inward half to reduce the deficit to two holes, and despite dropping three behind again after a bogey four at the thirteenth, Telfer took successive holes from the fourteenth to reduce the deficit to one hole with three to playThe siteenth was halved in par and despite a good chip at the seventeenth fron just short of the green, Telfer was unable to salvage a par, leaving Hamilton with a five foot putt for a winning par, which he successfully executed to secure a 2 & 1 win.

Thomas won his third hole in succession with a par four at the seventeenth to edge ahead in the match again, but a bogey five at the final hole let Gray secure a half with a winning par four, to take the match into extra holes.

At the first extra hole, Thomas booked his place in the quarter finals of the championship with a winning par four.

The players matched each other over the opening stretch before Gimson took the lead at the fifth with a birdie three, but the match returned to all square when the seventh was conceded to Broun, who capitalised by taking the next two holes also to lead by two at the turn.

Gimson reduced the deficit to one at the eleventh and squared the match with a birdie three at the twelfth hole before taking the lead once again with a winning par three at the fifteenth. A par four at the sixteenth was good enough to extend Gimson's lead to dormie two, but he got into trouble at the penultimate hole to let Broun win the hole and take the tie to the last.   At the final hole, Gimson secured a par four which was sufficient for him to win the hole and secure a two hole victory.

Telfer took and early lead when Shanks lost his tee shot at the first but Shanks recovered quickly, taking the next five holes to forge a four hole lead after six. Despite Telfer winning the eighth to reduce the deficit, a par four from Shanks at the ninth gave him a four hole lead at the turn.

The next two holes were exchanged through winning birdies and a lost ball for Shanks at the twelfth allows Telfer to reduce the deficit to three holes with six to play. Despite recording pars over the remaining holes, Telfer was unable to reduce the deficit any further, Shanks matching his figures to secure a 3 & 2 win and a place in the quarter finals.

A lost ball at the first for Smyth gave Spence the lead, but he encountered the same problem at the third, to make the match all square again.A birdie four at the sixth hole gave Smyth the lead for the first time which he maintained through the turn before extending his advantage to two holes with a winning par at the tenth.

A par four at the twelfth was good enough for Spence to reduce Smyth's advantage to one and a birdie four at the fourteenth allowed Spence to level the match for the first time since the fifth hole.

The match remained all square through fifteen and when par fours were sufficient for the players to trade holes at the sixteenth and seventeenth, the match went to the last hole all square. At the final hole disaster struck for Spence when his drive drifted out of bounds on the right. Smyth found the centre of the green safely in two, and when Spence could make no better than six with his second ball, the hole was conceded and Smyth went through with a one hole win.

Shaun Hedger (West Kilbride) was drafed in as a late reserve on Sunday following the withdrawal of James Johnston, and faced Steven Wallace (Prrstwick St Cuthbert) in the sixth tie.

A four at the opening hole gave wallace an early lead and the players matched each other until the seventh when Hedger took the hole to square the match.

Pars from both players over the next two holes left the match all square at the turn, before Wallace restored his lead with a winning par four at the tenth. A concession at the thirteenth from Hedger gave Wallace a two hole lead with five to play, but a run of four successive bogeys from the fourteenth, against four successive pars from his opponent, saw Wallace lose all four holes to Hedger and thus the match by 2 & 1.

A scrappy start from McLean saw Macneal take a two hole lead after two and although a par four at the third allowed McLean to reduce the deficit to one, a bogey at the fifth from McLean allowed Macneal to restore his two hole advantage through six, before three successive bogeys from Macneal saw his lead overturned, with McLean leading by one hole after the opening nine.

Mclean took the eleventh to extend his lead to two holes but then lost three successive holes to allow Macneal to take a one hole lead after fourtheen. A par four at the sixteenth saw McLean square the match once again and the seventeenth was halved to leave the match all square with one to play. At the final hole, McLean was on the green in two whilst Macneal was right with his approach shot. Macneal compounded his error by hitting his chip to the green too strong, the ball running through the green and into a greenside bunker, and his failure to get up and down from the bunker prompted a concession of the hole, and the match, to Mclean with a sinlg hole margin of victory.

The last match out was an all Kilmarnock (Barassie) tie between the 2015 runner up, Stuart Miller, and his club mate Adrian Orton.

Despite the testing weather condition, Orton got of to an excellent start, figures of one under par through six giving him a four hole lead. Miller kept working away however, and took the last two holes of the outward half to turn for home two down.

Miller won the tenth with a par four to reduce the deficit to one but Orton stemmed the flow, taking the eleventh and thirteenth to go three ahead with five to play.  The player matched each other over the next two holes, leaving Orton dormie three, but Miller wasn't finished and successive pars at sixteen and seventeen were good enough to win both holes and take the tie to the last. Despite Miller making a third successive par on the closing hole, Orton was able to match his closing par four to secure a one hole win and a place in the next round.