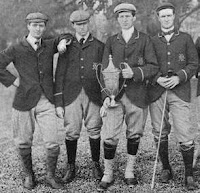 Kilmarnock (Barassie) and Ballochmyle are the latest clubs to book their place in the second round of the new Ayrshire Scratch team Knockout Competition.

The Kilmarnock (Barassie) team travelled to New Cumnock for their first round tie and recorded a 2 - 1 win over their hosts to set up a home tie in the second round against either Crosshouse or Abbotsford.

Ballochmyle were at home to Turnberry in their opening tie of the competition and won through by 2.5 - 0.5, with the final tie being agreed as a half after the host club won the other two ties to secure a win. Ballochmyle now travel to Ardeer in round two.

All remaining first round ties are due for completion by 29th May.
Posted by AJM at 11:19 am