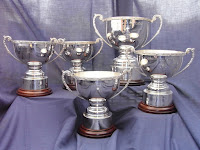 Fixtures are now under way in all five of the 2016 Ayrshire Scratch leagues, with matches due to continue throughout the summer.

In DIVISION 1 the only result reported so far was the 3 - 3 daw at Loudoun between Loudoun and Prestwick St Cuthbert.


DIVISION 2 is well under way with a number of matches having been completed.
Troon St meddans lead the way with two wins from two, away wins by 4 - 2 and 3.5 - 2.5 against Troon Welbeck and Girvan respectively.

Irvine Ravenspark lie second after their good opening fixtures, though their hopes were dented a little with a narrow 3.5 - 2.5 in their latest fixture at West Kilbride

Girvan remain pointless so far after their defeat by Troon St Meddans and a further 4 - 2 defeat at Ayr Belleisle.


In DIVISION 4, Troon Portland's opening 3.5 - 2.5 win at Brunston Castle gives them the early lead in the table.

Ayr Seafield are the earely leaders in DIVISION 5, following their 4 - 2 home win over Crosshouse in their opening fixture.