Without a shadow of a doubt, Louise Duncan's victory in the Woman's Amateur Championship held at Kilmarnock Barassie last week, from the 7th to the 12th of June, is the most outstanding achievement in Woman's amateur golf in Ayrshire for well over half a century. 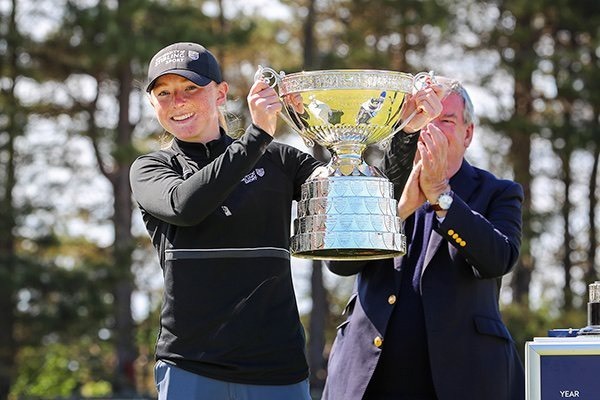 Not since the legendary Helen Holm of the Ladies Golf Club, Troon, won the same title in 1934 and 1938 has any Ayrshire golfer secured such a prestigious title, and the well deserved opportunities that follow on from the championship win.

The 21 year old Stirling University student, a member of West Kilbride Golf Club from an early age, developed her talent over the Ayrshire links and no doubt the win was all the sweeter, being secured in her home county.

A level par total of 146 over the two qualifying rounds saw her qualify for the matchplay stages very comfortably in seventh place and after a comfortable win by 7&5 over Thalia Kirby from England, a 3&2 win in her second outing against England's Lottie Woad took her throough to the quarter finals where she had a closer match, winning through by a single hole against another English player, Jessica Baker, to set up a all Scottish semi final against Broomieknowe's Hannah Darling which went to the first extra hole and where Louise secured a final spot with a winning birdie, showing real resilience after losing the final hole of the regulation round which took the match into extra holes.

In the 36 hole final on Saturday the 12th of June, Louise played Iceland's Jóhanna Lea Lúðvíksdóttir, who had previously ended the hopes of another Ayrshire qualifier, Hazel MacGarvie, in an earlier round.

There was little between the players in the opening nine holes of the final with Louise falling behind by a single hole twice in the match, courtesy of her opponent's birdie fours at the 1st and 7th, before she leveled the tie with a birdie three at the 9th.

Any hopes of a fightback from her opponent were immediately dashed at the start of the afternoon round when Louise extended her lead with another eagle three at the opening hole, after holing an outstanding bunker shot, and she increased her lead further by taking the 4th, followed by a birdie at the seventh to move to eight up with eleven to play. A further win at the ninth took her to 9 up and when she closed out the match with a par four on the 10th in the afternoon round, her 9 & 8 victory was the highest winning margin recorded in the history of the tournament.

When interviewed after her win, Louise Duncan was delighted with her achievement but was obviously having difficulty taking in the enormity of what she had done. Over and above ending the 83 year wait for another Ayrshire winner, Louise's win was the first by a Scot in the championship since Alison Rose was victorious at Cruden Bay in 1997, beating Turnberry's Mhairi McKay in the final. Louise joked that she wasn't even born in 1997, and she was happy to have brought the trophy back home.

Rewards for her title win will follow and Louise can already look forward to some new competitive experiences as a result, including places in the AIG Woman's Open at Carnoustie, The US Woman's Open, The Evian Championship and the Augusta National Women's Amateur Championship.

Louise, all of Ayrshire salute you and your magnificent achievement.