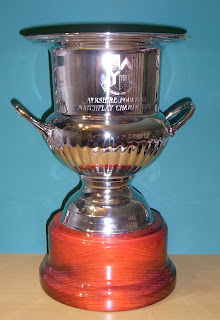 A number of second round results in the 2021 Ayrshire Fourball Championship have been posted recently, with all remaining second round ties due to be completed by this coming weekend.

Alan Stewart & Alan Stewart Jr, (Stewarton) traveled to play Jamie Rankine & Derek McMurdo (Ballochmyle) and recorded a 2&1 win to set up another away tie in round 2, against the pairings from Auchenharvie 88 or Annanhill.

Colin Borthwick and Billy Scott (Ballochmyle) had a 3&2 home win over near neighbours John Scott & Jim Morrison (New Cumnock) and will now be at home to either Prestwick Centre or Ardeer in round 3.

A single hole win was posted by Colin Wallace & Gordon Jess (NB Parkstone)  over Hugh Muirhead & John Arlow (Muirkirk) to set up a home match against Malletsheugh or Kilmarnock Barassie) in round 3, whilst Craig Stevenson & Andy McConnell (Crosshouse) were taken to the second extra hole by their visitors Mark Cowan & Drew Robertson (West Kilbride) before winning through to round 3, where they will be at home to Troon Welbeck or Braehead.

Also through to round 3 are Billy Pollock & Sandy Riddell (Skelmorlie), who were awarded a walkover by Michael McMaster & Steven Johnston (Girvan), and are now away to either Ayr Dalmilling or Irvine.