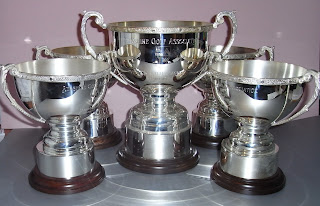 
A 4 – 2 home win over Turnberry moved the Irvine club ahead of defending champions Loudoun at the top of the table.

In the other match played recently, Prestwick S Cuthbert recorded their first win over the campaign, a comprehensive 5 – 1 home victory against Kilmarnock Barassie.

One notable incident in the match was Steven Wallace’s final hole victory over Ross caddis, which was secured by holing a 7 iron shot from 185 yards for a winning albatross two at the final par five hole at St Cuthbert.

In DIVISON 2, Largs are out in front following a 4.5 – 1.5 home win over Caprington in their latest fixture.

Divisions 3a and 3b are unchanged at present, the positions in each league being :-