AYRSHIRE CHAMPION OF CHAMPIONS - MacDonald and Haggarty through to last 16 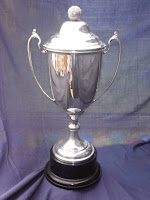 The first two places in the last 16 of the 2021 Ayrshire Champion of Champions Trophy have been secured as the competition progresses towards the semi final and final matches at Royal Troon in August.

David MacDonald (Largs) won at the third extra hole on his visit to play Stuart White (Girvan). In the last 16 MacDonald will be away to either Andrew Carrol (Drongan) or Connor Martin (Braehead).

John Haggarty (Loudoun) eased into the last 16 with a 6 & 5 home win against Tom Reid (Stewarton) in their second round match. Haggarty will visit either Stuart Miller (Kilmarnock Barassie) or Alan Watson (Ballochmyle) in round 3.

All remaining second round matches are due to be completed by  he 4th of July.