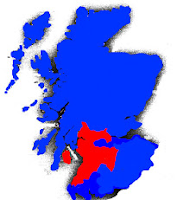 Ayrshire, Glasgow, Lanarkshire and Renfrewshire are all represented in the semi finals of the 2021 West of Scotland Boys Championship following completion of the first round matches in glorious conditions at Rowallan Castle golf course on Tuesday morning, the 29th of June.

Alexander Farmer (Kilmacolm) remains on course to complete a championship double following his win in the strokeplay event on Monday. In the first match off in the morning, he completed the 17 holes in one under par, with three birdies during the round, on his way to a 2 & 1 victory over Rudy Brown (east Kilbride) .

In the semi finals on Tuesday afternoon, farmer will play Charlie Greaves (Glasgow), who eased past Joseph Kelly (Cambuslang) in the opening round with a 4 & 3 victory.

Fraser Hamilton (Hamilton) had the greatest margin of victory in the first round, beating Ryan Stribling (Turnberry) by 5 & 4, and in the semi final will be up against Max Barclay (Ayr Belleisle), who won the all Ayrshire first round clash against Jack Ramsay (Kilmarnock Barassie) by 3 & 2.

The semi finals take place on Tuesday afternoon, with the final scheduled for Wednesday morning, the 30th of June, at Rowallan Castle.