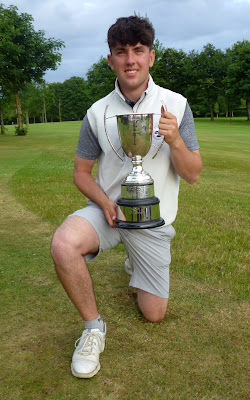 Jack Broun (Turnberry) is the 2021 Ayrshire Strokeplay Champion following his victory over Daniel Forbes (Irvine) on the fourth play off hole after the pair tied on 135 over the two rounds of the championship, held at Loudoun Gowf Club on Sunday the 27th of June.

A capacity field enjoyed glorious weather and a course in first class condition as the championship was played in mid summer following postponement due to COVID on it's traditional April date.

Turnberry members Steven Stamper and Ruben Lindsay lead after the opening round with scores of 66, but the highlight of the opening round came from host club member John Haggarty who recorded a hole in one on the 156 yard 11th hole.

Steven Stamper secured third place overall, on 137, after a second round of 71, before Daniel Forbes added a 68 to his morning round for a total of 135 and the leaders position in the clubhouse.

With only a few players in the field remaining with a realistic chance of matching or beating daniel Forbes' score, it fell to Jack Broun to post a second round of 66, the best of the afternoon alongside Craig Telfer (Prestwick St Cuthbert), which left Jack Broun and Daniel Forbes tied on 135.

The only realistic challenger still on the course was Scottish Internationalist Ruben Lindsay (Turnberry) but he faltered over the closing few holes and could do no better than 73 in the afternoon to put him out of the running.

Jack Broun lost to Michael Smyth (Royal Troon) in a play off for the title the last time the championship was hosted by Loudoun Gowf Club, in 2019, which undoubtedly was at the back of his mind as he made another play off bid for his first men's county title.

A three hole play off took place over the 13th, 11th and 12th holes. At the opening hole of the play off both players found the green in two and after Daniel's 20 foot putt pulled up short, Jack's 15 foot putt for a birdie missed on the left, leaving the hole halved in par fours.

At the par three eleventh hole both players hit nine iron with Daniel finding a bunker on the left of the green and lipping out with a 40 foot putt for par, en route to a bogey four. Jack Broun successfully two putted for par to take a one stroke lead going to the final play off hole.

At the final hole, the 12th on the course, jack's approach was too strong and went through the back and into the burn behind the green. Whilst daniel pitched to 25 feet en rout to securing his par 4, Jack took a penalty drop, chipped on  and bravely holed his putt for a bogey five to take the championship decider into sudden death play off holes.

The players continued onto the 4th play off hole, the first on the course and both players were well positions from the tee, with Daniel's tee shot some distance beyond Jack's. Playing first, jack Broun struck an excellent approach to within just a few feet of the hole, whilst Daniel followed him in, safely reaching the green with his ball finishing some 20 feet from the hole, but with a difficult left to right putt to negotiate for his birdie three. despite an excellent effort, Daniel's putt stayed above ground and he had to settle for a par 4, and he could only watch on as |Jack Broun bravely holed his put for a winning birdie three to take the 2021 Ayrshire Strokeplay title.

The Ayrshire Golf Association are very grateful to the committee and members of Loudoun Gowf Club for hosting the championship this year, and their ongoing support of The Association's activities year on year.