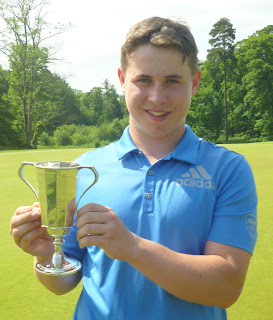 Charlie Greaves (Glasgow GC) is the 2021 West of Scotland Boys Matchplay Champion following victory over Max Barclay (Ayr Belleisle) in the final at Rowallan Castle GC on Wednesday the 30th of June.

The final was a closely fought affair, played in fine and sunny conditions, and conducted in an excellent, friendly, spirit which was a credit to both finalists.

Max took the early lead with an opening par four, after Charlie missed the green to the right with his approach and failed to get up and down, but the match was squared at the second hole when Charlie holed from 18 feet for a birdie 2, whilst Max's effort from 15 feet struck the pin and spun out of the hole.

After a couple of halved holes in regulation pars, Max took the lead again when Charlie missed the green to the right at the short 5th hole, and failed to get up and down for par, but again the match was squared two holes late when Max missed from 6 feet for par. The players saw out the outward half with successive halved holes in par to leave the match all square at the turn, both players having one over par figures of 36 for the outward 9.

Again it was Max who took the lead at the 10th, getting up and down from just off the back of the green for a par 3, whilst Charlie was unable to match him from the front right bunker.

Charlie was consistently longer off the tee throughout the match and he used his length to full advantage at the 287 yard 12th hole, hitting a magnificent drive onto the green to set up a winning birdie three to square the match once again.

At the 13th hole Max restored his one hole advantage after Charlie suffered the only three putt by either player in the match to lose the hole to par.

The players negotiated the 343 yard 14th hole in completely different styles, Max laying up from the tee with an iron and Charlie going for length with a driver, but the result was that Charlie holed from 12 feet for a birdie three, only to see Max follow him in from 5 feet to halve the hole.

The tee shots at both the 15th and 16th holes proved decisive in the match, Max finding bunkers on both holes from the tee which resulted in him losing both holes to par as Charlie took the lead in the match for the first time.

At the 183 yard, par 3, 17th hole, Charlie teed off first but found the bunker on the right of the green whilst Max saw his tee shot come up short, also in a bunker. Max played out first, to 5 feet from the hole but had no opportunity to try for a half to take the match to the last as Charlie played a magnificent bunker shot which saw the ball run across the green and drop into the hole for a winning birdie two to give him the match, and 2021 title, with a 2 & 1 victory.

Presentations were made to both players at the end of the match by Ayrshire Golf Association President John W. Watt, and thanks were extended to Rowallan Castle Golf and Country Club for hosting the event during the week.
Posted by AJM at 9:50 pm