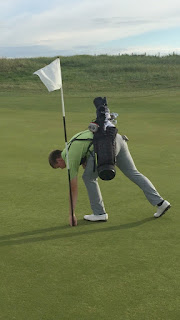 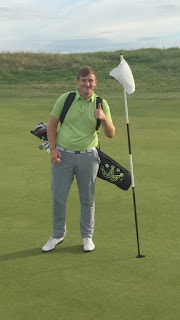 Ewan Milligan (Kilmarnock Barassie) had an ace up his sleeve in the first round of the Ayrshire Boys Matchplay Championship at Prestwick GC on Tuesday evening, 7th August, when he holed in one at the 195 yard par three eleventh hole en route to victory in his tie.


Milligan was up against Kyle McCaig (West Kilbride) in the opening round.

It was Milligan that took the early lead with a winning par four at the first but McCaig hit back with a birdie four at the third hole to level the tie. The remaining holes in the outward half were exchanged, with the players turning for home all square.

McCaig took the lead at the tenth but then came what proved to be the turning point of the match where Milligan holed his tee shot to win the hole and square the match once again.

In Wednesday's semi final, Ewan Milligan will face defending champion Euan Ferguson (Turnberry), after the title holder saw off the challenge of John Kelly (Ayr Seafield) with a 4 & 3 win.

Ferguson took the first after Kelly went out of bounds with his tee shot and a par three at the second was good enough to extend his lead to two holes.

A par four at the fourth and successive birdies at the fifth and sixth holes were good enough to extend Ferguson's lead to five holes after six, and he rounded the half off by taking the ninth with a par four to turn for home six up.

Kelly stemmed the flow over the opening holes of the inward nine and reduced the deficit to four with successive par fours at the thirteenth and fouteenth. Holes were running out for Kelly and a half in par fours at the fifteenth was good enough to secure Ferguson a 4 &3 victory and a place in the semi finals.

In the to half of the draw, Ayrshire Boys' Strokeplay Championship winner Sean Addie (Ayr Belleisle) recovered from a shaky start to book his place in the semi final with a 5 & 4 win over Elliot O'Brien (Irvine).

Opening the matches, Addie saw his first tee shot drift over the railway wall and out of bounds which resulted in O'Brien taking the early advantage.

The second hole was halved in birdie two's before Addie squared the match with a par five at the third hole.

Addie took the lead for the first time by winning the fourth and extended his lead to three holes after six before finishing the outward nine by taking the ninth hole for a four hole advantage going to the homeward nine.

A concession at the tenth put Addie five holes ahead but O'Brien hit back immediately by winning the eleventh hole, only to lose the thirteenth to give Addie a five hole advantage once again.

At the fourteenth, the match concluded with a half in fours,. to give Sean Addie a 5 & 4 win and a place in the semi finals.

In the semi finals Sean Addie will face Ross McDonald (Kilmarnock Barassie) after McDonald saw off Jamie McKinnon (Caprington) with a 2 & 1 win.

The first and second holes were exchanged, and the third halved in birdie fours before the match turned in McKinnon's favour when he won the fourth with a birdie three and the fifth with a par three, to go two up.

A pair of par fours at the seventh and eighth extended McKinnon's lead to four holes, before McDonald clawed one back at the ninth with a par four and the players turned for home with McKinnon three holes to the good.

Pars at the tenth and twelfth were enough to allow McDonald to reduce the deficit to two holes before a birdie three at the fourteenth let him square the match for the first time since the third.

The match was still all square after fifteen and it was the short par four sixteenth that proved crucial, with McDonald winning it with a good birdie three.

At the difficult seventeenth, McDonald managed a bogey five, but that ws sufficient to take the hole and the match, with a 2 & 1 victory.

The semi final ties, which tee off on Wednesday evening at 4.30 p.m. at Prestwick GC, are:-