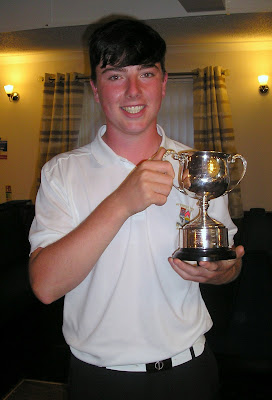 Sean Addie (Ayr Belleisle) added further to an impressve season on Thursday 2nd August when he won the 2018 Ayrshire Boys Championship over two rounds at Ardeer.

The winner of the Tam O Shanter Trophy tournament over his home course in June, Addie returned rounds of 73 and 71 at Ardeer for a level par total of 144 which sw him take the title by a clear four shot margin from his playing partner cameron Johnstone (Troon Welbeck), who matches Addie's 73 in the morning but slipped to 75 in the afternoon for a 148 total.

Ewan Milligan (Kilmarnock Barassie) secured the third leading scratch spot on 152, with rounds of 80 and 72, leaving him ahead of Euan Ferguson (Turnberry) in fourth place by virtue of the better second round as Ferguson's rounds were 79 and 73.

The numbers in the field were boosted this year with the removal of the handicap limit, and it was competitors from Irvine Golf Club who dominated the nett prize list.

Top spot was won by 12 handicapper Elliot O'Brien (Irvine) who followed a morning round of 72 with a superb closing round, in increasingly wet conditions, of 62 for a nett total of 134 which gave him a four shot winning margin.

The second best nett score was posted by 21 handicapper Jamie McCormack, also of irvine GC,  who followed a morning round of 72 with an afternoon score of 66 for a total of 138


A full list of scores is available via masterscoreboard