AYRSHIRE CHAMPION OF CHAMPIONS - Moultrie and Murdoch through to quarter finals. 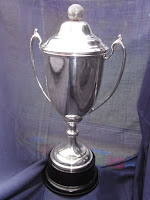 Paul Moultrie (Royal Troon) and Frank Murdoch (Brunston Castle) are the first two players through to the quarter finals of the 2015 Ayrshire Champion Of Champions Trophy competition.

In the last sixteen, Moultrie had a 4 & 3 home win over James Graham (Doon Valley) to go through and now has a home tie in the quarter finals against either John Shanks (Irvine) or Tommy McInally (Loudoun).

Murdoch booked his place in the last eight with a one hole win at home to Andrew Power (Troon St Meddans) in the third round.

Murdoch is also at home in the quarter finals, against either Stuart Miller (Kilmarnock barassie) or Scott Ainsworth (Ardeer)

The remaining third round ties are due to be completed by 21st June.
Posted by AJM at 1:00 am