Shaun Hedger (West Kilbride) is the 2022 Ayrshire Matchplay Champion, following a victory over Blair Morton (Royal Troon) in extra holes in the final, held at Ayr Belleisle on Thursday the 5th of May. 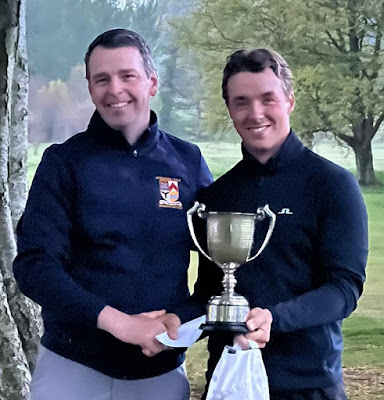 Hedger had previously lost in the final of the event at Rowallan Castle in 2018 and his win this year was his first county title triumph.
Shaun Hedger began the match in great style, with birdie fours on the opening two holes winning him both holes, after Blair Morton erred left from the tee at both holes and could only manage pars at both.
At the short par three third Shaun had a chance to extend his lead with a downhill birdie putt but he raced the putt five feet past the hole and did well to sink the return for a half. he did well to secure a half at the fourth hole too after finding trees on the left from the tee which forced him to pitch out, whilst Blair successfully reached the green in two, leaving himself a fifteen foot putt for birdie. Shaun's approach came to rest on the left fringe of the green but he holed his putt from thirty feet for a par four, which ultimately gave him an unlikely half after Blair's birdie putt slipped just past the right side of the cup.
The fifth and sixth holes were halved in pars but at the seventh Shaun Hedger extended his lead to three holes. With both players through the green with their tee shots, Shaun found his ball above ground and was able to chip to eighteen inches for a conceded par three but Blair was not so fortunate as his tee shot finished plugged in a bunker at the back of the green and, though he got the ball out, he could not controll the shot and the ball ran to the front of the green from where he was unable to sink his long putt for a par. 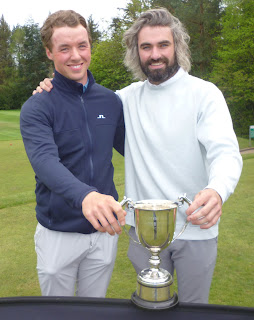 The match turned in Blair Morton's favour at the eighth. Blair Morton was shorter off the tee and played his second to 25 feet from the hole whilst Shaun Hedger hit his drive at the par four hole into a bunker just twenty yards from the green, from where he played his second to eighteen feet from the hole. Putting first, Blair holed his putt for a birdie three which Shaun was unable to match, his effort missing the hole on the left, and the match score was reduced to two holes in favour of Shaun Hedger.
With one of the shots of the day at the par four ninth, Blair Morton found the green with his drive and his 24 foot eagle putt finished within a foot of the hole for a conceded birdie. Shaun hedger's tee shot came to rest in a greenside bunker and despite a good bunker shot to within twelve feet of the hole, he was unable to match Blair Morton's birdie and the match score was further reduced to a single hole advantage to Shaun as the match reached the half way stage.
With the tenth halved in par threes, Blair Morton birdied the eleventh hole to square the match for the first time since the first tee, sinking his twenty foot putt to win the hole, after Shaun's approach came up just short of the green and he was unable to do any better than a par four.
At the twelfth Shaun Hedger found trouble in the trees on the right from the tee and was only able to play his second wide to the right of the green. meanwhile Blair Morton, from the centre of the fairway, hit his approach to fifteen feet from the hole, with two putts securing his par four from there. Shaun Hedger's chip finished twelve feet high of the hole and when his par putt pulled up short of the cup, Blair Morton took a lead in the match for the first time. 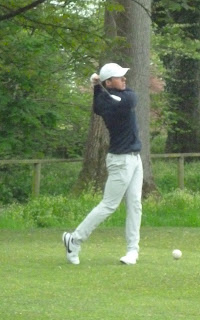 The thirteenth was halved in par fours, both players going close with their respective birdie putts but when Blair Morton bunkered his tee shot at the par three fourteenth, he was unable to get up and down for par and Shaun Hedger was able to chip from the front of the green to near the hole, with his conceded par three allowing him to square the match once again.
After Blair Morton's approach at the fifteenth drifted right of the green, Shaun Hedger had a chance to take the lead, but a good putt from the fringe from Blair secured a conceded four and when Shaun's birdie putt slipped past the hole the match remained all square with three holes to play.
Playing first from the tee at the sixteenth, Shaun Hedger hit an iron to just short of the burn at the corner of the dog leg, whilst Blair Morton opted to go with driver in an attempt to clear the burn, only for his pulled tee shot to plunge into the group of trees on the left at the edge of the burn. Compounding the situation, Blair's provisional ball drifted right from the tee and into trees just past the burn.
A search for both balls was unsuccessful and the hole was conceded to Shaun Hedger who took a single hole advantage again in the match.
At the par three seventeenth Shaun missed the green on the front right from the tee, though in the event he easily secured a par with his first putt finishing just four inches from the hole. Despite his trials at the previous hole, Blair Morton produced one of his best shots of the day at the seventeenth his tee shot landing twelve feet past the hole before spinning back to eight feet, from where he duly holed his putt for a birdie two to square the match once again. 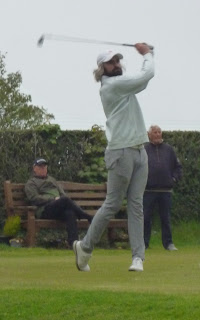 Both players hit irons from the tee at the final regulation hole of the match, Blair finding the right side of the fairway whilst Shaun's ball ran into the semi rough on the left. With the state of the match no doubt a factor, Blair's second shot with an iron was pulled wide left, into the second cut of rough, from where he could ultimately only chip out short of the green in three. Going with a wood for his second, Shaun saw his effort hit a tree at the top of the hill just in front of him, but was fortunate to see the ball continue forward, coming to rest in the first cut of rough on the left.
Shaun's approach was a little long and left, coming to rest a few yards wide of the green, and although Blair's approach finished well short of the hole and he could ultimately only manage a bogey six to finish, Shaun failed to take advantage, his chip to the green being too strong, with the ball running fifteen feet past the hole. Facing a tricky right to left putt for his par, and the championship, Shaun hedger saw his putt pull up agonisingly an inch short of the hole, leaving the match all square and destined for extra holes.
Both players successfully found the green at the par five first hole, the nineteenth of the match, and both had good efforts with their respective eagle putts, though ultimately the hole was halved in birdies and the match proceeded to the second extra hole, the par five second hole of the course. 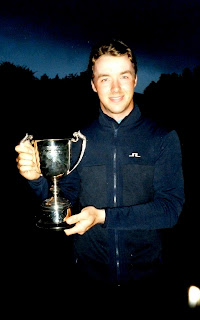 At the 20th Blair Morton pulled his tee shot wide left and after the ball came to rest behind a small tree, he was only able to play the ball back out onto the fairway in two, to the top of the ridge that drops down towards the green, from where he found the green in three, some forty feet or so left of the hole.
Having found the centre of the fairway from the tee, Shaun Hedger pulled his second shot just left of the green and pin high, from where he played a fine chip up onto the green to within eighteen inches of the hole. Blair Morton made a brave effort with his putt for a four, but when his ball remained above ground he sportingly conceded Shaun Hedger's remaining putt for a birdie, and the title, to the 2022 champion.
The match was played in excellent spirit and sportsmanship throughout with both players producing some fine golf , befitting a county final.
At the conclusion of play, Ayrshire Golf Association President Scott Gilchrist presented vouchers to both finalists and handed the trophy over to the 2022 Ayrshire Matchplay Champion, Shaun Hedger
Posted by AJM at 2:02 am