The Ayrshire matchplay championship trophy will have a new name added in 2022 after the quarter finals were completed at Ayr Belleisle on Tuesday the 3rd of May, with none of the four players remaining in the competition having enjoyed success in the event in the past.

The first quarter final saw Ayrshire Strokeplay champion Scott Brown (Turnberry) up against Blair Morton (Royal Troon) in what proved to be a tight match. After 14 holes Blair Morton held a single hole advantage but in a strong finish he took the fifteenth hole to extend his advantage and a birdie three at the sixteenth gave him another hole, and the match, with a 3 & 2 victory.

Second tie out on the course on Tuesday featured Max Barclay (Ayr Belleisle) and Steven Stamper (Turnberry). A fine scoring performance by Max Barclay, who was four under par for the holes played, with no bogeys recorded, saw him hold a single hole advantage after sixteen holes, and after Steven Stamper missed the seventeenth green from the tee and could only make a bogey four, a two putt par was enough to give Max Barclay the hole and a 2 & 1 victory.

In the third tie the defending champion Craig Telfer (Turnberry) faced his former clubmate Adam Sweeney (Prestwick St Cuthbert) in a great tie which went all the way to the final green before the winner was decided. After 12 holes Adam Sweeney held a two hole advantage, which he extended with a two putt four at the thirteenth, only for Craig Telfer to reduce the deficit to two holes again by winning the par three fourteenth. A further win for Craig telfer at the fifteenth reduced Adam Sweeney's advantage to a single hole and after the sixteenth was halved in pars, Craig Telfer levelled the match at the seventeenth, holing from 24 feet for a winning birdie two. Though the momentum was with Craig Telfer as the players went to the final hole, it was to the credit of Adam Sweeney that he held his nerve, and when the title holder found trouble with his second shot on the left, which gave him no option but to play out short and chip onto the green in four, Adam Sweeney boosted his hopes by finding the left edge of the green with his third shot, and safely two putted for a par five, leaving Craig Telfer needing to hole his par putt from twelve feed to maintain his grip on the trophy and take the tie into extra holes. Despite his best efforts, Craig Telfer's putt pulled up just short of the hole and Adam Sweeney progressed to the semi finals with a single hole victory.

The final tie of the night brought together Daniel Forbes (Irvine) and Shaun Hedger (West Kilbride) and it was Shaun Hedger who took the early advantage, holding a two hole lead after eleven holes, which he extended to three holes ahead with three to play. Despite finding the burn with his tee shot at the sixteenth, which allowed Daniel Forbes to reduce the deficit to two holes, Shaun Hedger secured the necessary half in par at the seventeenth hole for a 2 & 1 victory in the match and a place in the semi final.

The semi final line up on Wednesday the 4th of May is:- 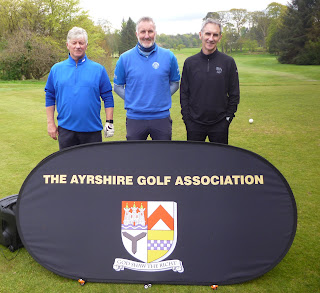 Watching the players teeing off on Tuesday evening, and playing their own keen contest following on after the last quarter final tie, were a trio of well known former footballers who played for both Ayr United and Kilmarnock in years gone by, who were happy to pose for a photo before showing off their own skills, or otherwise, from the first tee.....Take a bow messrs. Reilly, McInally and Connor !
Posted by AJM at 1:43 am