Blair Morton (Royal Troon) and Shaun Hedger (West Kilbride) will contest the final of the 2022 Ayrshire Matchplay Championship at Ayr Belleisle on Thursday evening, the 5th of May, following victories in their respective semi final matches on Wednesday evening. 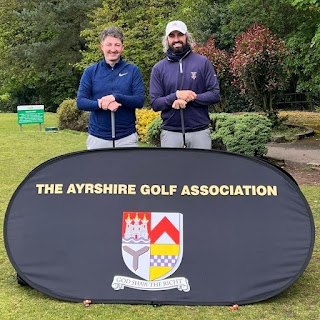 In the first semi final on the course, Blair Morton was up against Adam Sweeney (Prestwick St Cuthbert) and got off to a great start with a winning eagle three at the first hole, only to double bogey the second as Adam squared the match with a par four, with Blair restoring his one hole advantage at the next hole with a birdie two.

A bogey at the fourth hole by Blair let Adam square the match once again and the match remained tied over the next four holes which were halved in pars, before Blair Morton had a birdie three at the closing hole of the outward nine to turn for home with a one hole lead.

In keeping with the pattern of the match, Adam Sweeney had a birdie two at the tenth to square the match once more, only for Blair Morton to birdie the par four eleventh to go one ahead again. With two thirds of the round completed, the decisive hole came at the thirteenth where a birdie four won Blair Morton the hole and gave him a two hole advantage for the first time in the tie.

Adam Sweeney battled on, matching Blair Morton over the next two holes which left Blair two up with two to play. Playing first at the penultimate hole, a 152 yard par three, Blair hit an excellent tee shot to just four feet short of the hole. To his great credit, Adam Sweeney followed with an even better tee shot which came to rest a foot closer to the hole than his opponents ball, but after Blair Morton saw his birdie effort slip past the hole Adam Sweeney saw his putt, to take the tie up the last, agonisingly hit the back left of the hole and spin out, giving Blair Morton a 2 & 1 victory and a place in the final. 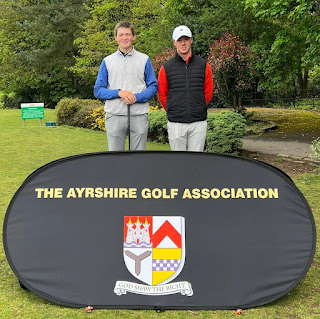 In the second semi final Shaun Hedger had a great tussle with Max Barclay (Ayr Belleisle) which went all the way to the final green before the place in the final was decided.

In a match which provided excellent scoring throughout the opening two holes were won with birdie fours, max taking the lead at the first and Shaun squaring at the second, before max went ahead again with a par three at the third, only for Shaun to birdie the fourth to level the tie once again. A par four at the fifth hole was enough to give Shaun Hedger the lead again and with the next two holes being shared in birdies then pars, it was down to Max to square the match again with a birdie three at the eighth hole. It was perhaps fitting, given the scoring that had gone before, that the final hole in the outward nine was halved in birdie threes as the players turned for home all square.

It took yet another birdie three at the eleventh for Shaun Hedger to restore a one hole advantage in the match  and after max Barclay bogeyed successive holes at the thirteenth and fourteenth, Shaun Hedger took control of the match with a three hole lead, with four to play.

To his great credit however, Max Barclay did not give up the fight and a birdie four at the fifteenth reduced the deficit to two holes, whilst a half in fours at the sixteenth left Max needing to with the last tow holes to take the tie into extras holes.

At the par three seventeenth Max hit his tee shot to the centre of the green, some twelve feet from the hole whist Shaun missed the green to the left and came to rest in a bunker. Keeping the pressure on, Shaun played an excellent bunker shot to within a foot of the hole, prompting a conceded par three, but Max Barclay showed true battling qualities, bravely holing his testi9ng putt for a birdie two to take the tie to the final hole.

At the last both players were well placed in two. Playing first, max pushed his approach slightly and it came to rest on the front apron of the green, whilst Shaun's approach came to rest 12 feet above and left of the hole. Needing to win the final hole, Max Barclay's long putt for a birdie four was a great effort but came to rest above ground, a foot or so from the hole. With two putts for a half, and a single hole victory, Shaun Hedger rolled his downhill putt close enough to the hole to elicit a concession of the putt, and the match from Max.

The championship concludes at Ayr Belleisle on Thursday evening, the 5th of May, with the final teeing off at 5.00 p.m.