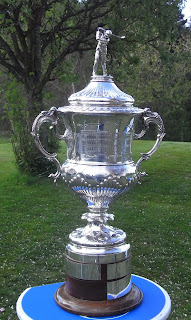 The week one results in all the 2022 Scottish Men's Area Team Championship qualifying section matches, played on Sunday 5th of May, have been published.

In GROUP 1, The Borders beat their visitors from Fife at Peebles GC by 5.5 - 3.5, sharing the points in the morning foursomes and winning the singles 4 - 32 in the afternoon.

Lothians got their title defence off to a winning start at Bathgate GC against The North District, sharing the spoils in the foursomes and winning the singles 4.5 - 1.5 for a 6 - 3 victory overall.

In GROUP 2 Ayrshire won the foursomes 3 - 0 against South of Scotland at Royal Troon and shared the afternoon singles en route to a 6 - 3 victory.

In the other fixture in the section, Dumbartonshire matched Ayrshire's 6 - 3 winning margin against Angus at Cardross fighting back from a 2 - 1 deficit in the morning foursomes to take the afternoon singles by 5 - 1.

In GROUP 3, Stirlingshire and Perth & Kinross shared the honours at Dunblane GC with a 4.4. draw, the visitors leading 2 - 1 after the morning foursomes but being pegged back by the hosts who took the afternoon singles 3.5 - 2.5.

In GROUP 4, Argyll & Bute and Lanarkshire fought out a 4.5 - 4.5 draw over the links at Macrahanish the visitors leading 2 - 1 after the foursomes but being matched overall when the hosts won the singles 3.5 - 2.5

The other match in the group saw North East District secure a narrow victory by 5 - 4 over their visitors, Renfrewshire, at Portlethen GC, with the hosts winning the singles 3.5 - 2.5 after the foursomes were shared in the morning.

The second round of matches take place on Sunday the 5th of June with fixtures scheduled as follows:-

Fife vs Lothians at Dunfermline GC

South of Scotland vs Dumbartonshire at Southerness GC

Angus Vs Ayrshire at Downfield GC