Prestwick St Cuthbert GC won the Ayrshire Club Championships for the first time in the history of the competition, when the 2016 event was held at Brunston Castle GC on Sunday 3rd July.


17 clubs were represented in the championship, with the best two scratch scores from three being combined for the team score.

Loudoun and Irvine set the early pace with a team totals of 148 before the Royal Troon team overtook them. Led by Stephen Machin with the best individual round of the day, a one under par 70, Matt Dargie (74) and Ian Walker (76) combined for a team total of 144 to take the lead.

2016 Ayrshire Strokeplay Champion Greg Telfer carded a level par 71 to lay the foundation of the Prestwick St Cuthbert team score and when his brother Craig Telfer matched his total of 71, Prestwick St Cuthbert led the tournament by two shots. David Glass, playing his second round of the day after answering a mid morning call to stand in as a late replacement added a creditable 77, despite the loss of three balls during the round, to back up the two counting scores.

Despite some good individual scores, none of the remaining team seriously challenged the Prestwick St Cuthbert total and the club took the R L Crawford trophy for the first time, following on from two runners up places in the last six years in the event. 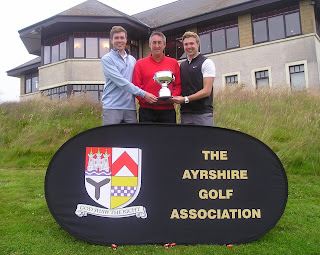 Ayrshire Golf Association President James McMurdo handed over the trophy, vouchers and commemorative medals to the three  winning team members at the conclusion of play and, on accepting the trophy, David Glass paid tribute to the host club and championship organisers for a succesful event.

Final results from the Ayrshire Club Championships were :-