UNDER 18 WEST OF SCOTLAND INTER COUNTY LEAGUE - Second successive win for Ayrshire as they beat their hosts at Dumbarton.

The Ayrshire Under 18 team had their second successive win in the West of Scotland inter county league competition, for the Wishart Trophy, on Sunday 23rd June when they defeated their hosts Dumbartonshire by 5.5 – 2.5 at Dumbarton Golf Club. 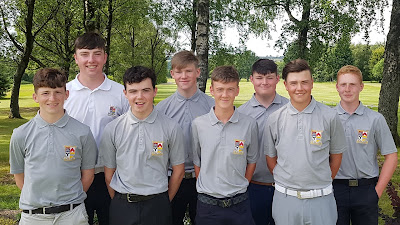 With a few players who appeared in the opening match unavailable for various reasons, the strength of the Ayrshire squad was highlighted when the change in personnel had no adverse effect on the team performance.

In the opening under 16 tie Josh Davies was unfortunate to lose on the final green but the other three Ayrshire under 16’s had very comfortable wins to put Ayrshire 3 – 1 up in the match.

John McCracken ensured at least a draw with a 3 & 1 win in his tie and though Chris Hunter lost out by 3&2 the win for Ayrshire was only delayed a little, with Ross McDonald securing the required point with a 4&2 win.

In the anchor tie, Sean Addie fought out a draw to give the final score of Dumbartonshire 2.5 Ayrshire 5.5

Ayrshire’s next match in the series is scheduled to take place on Sunday 14th July when the team are due to play Glasgow at ballochmyle.