AYRSHIRE CHAMPION OF CHAMPIONS - Buchanan and Sweeney through to quarter finals 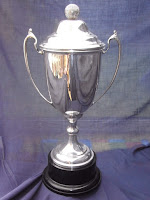 Sandy Buchanan (Prestwick St Nicholas) and Adam Sweeney (Routenburn) are the first two players through to the quarter finals of the 2019 Ayrshire Champion Of Champions Trophy competition.

Buchanan had a comfortable victory at home to Andrew Bell (Beith) in the third round, winning by 7&6 to go through to the last eight, where he will be at home to either Nicholas Tindall (Tam O Shanter) or Jason Butler (Irvine Ravenspark).

Adam Sweeney had an away tie against Graeme Warnock (NB Parkstone) in round three, which he won by 4&3 to book a quarter final trip to meet either Derek watt (Drongan) or Robbie Muir (Kilmarnock Barassie).

The remaining six third round ties are due to be completed by Sunday 16th June.
Posted by AJM at 1:38 am