Ayrshire are the 2015 Scottish Area Team Champions after defeating Dumbartonshire by 5.5 - 3.5 in the final at Blairgowrie Golf Club on Sunday 18th May.


Leading by 2 - 1 following the morning foursomes, Ayrshire needed three of the six afternoon singles to ensure their third title win in the event, following their previous two successes in 1986 and 2008.


Jack McDonald (Kilmarnock Barassie) faced the in form Ewan Ferguson (Bearsden) in the lead singles and it was the Ayrshire player who won by 3 & 2 to put the team a point closer to victory.


The match had been tight throughout and so it was to prove in the closing stages as Dumbartonshire fought back, with Chris McLean (Balmore) beating Tommy McInally (Loudoun) by one hole and Steven Stewart (Clydebank & Overtoun) winning by 2 & 1 against Keith Hamilton (Ayr Belleisle), to level the singles score at 2 - 2 with two ties remaining on the course. 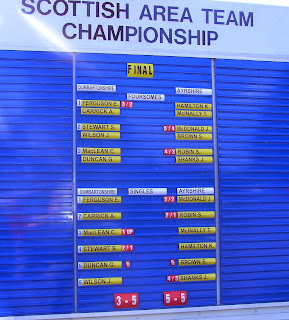 The honour of securing the winning point for Ayrshire fell to John Shanks (Irvine). Despite being two down after two holes against James Wilson (Balmore), Shanks fought back to forge a three hole lead with four holes remaining. At the fifteenth, Shanks had the comfort of two putts to win the hole and the tie and he rolled his first putt close enough to the hole to prompt a concession from his opponent, giving Ayrshire the vitam third point needed to take the 2015 Area Team Championship title.

In the final tie on the course, Scott Brown (Turnberry) had fought back from three down to George Duncan (Windyhill) to lead by two holes with two to play. The title having been secured following Shanks' win, Brown and Duncan agreed a half match, leaving the final match score as Ayrshire 5.5 Dumbartonshire 3.5.

In what was a great team performance, all six players contributed to at least 1 1/2 from a possible four points towards the Ayrshire wins in the three matchplay round en route to victory, with Jack McDonald taking four points from four and recording notable wins over Amateur Champion Bradley Neil, on his home course, in the quarter finals as well as a semi final win against fellow internationalist Matt Clark and a final win over the in form Ewan Ferguson.

Ayrshire's win was richly deserved and all the more notable as they defeated the host area and pre tournament favourites Perth & Kinross, who won the championship the last time it was played at blairgowrie in 2012, in the quarter finals before ousting the defending champions Renfrewshire in the semi finals and then defeating the top qualifiers Dumbartonshire in the final.

At the conclusion of the final, both teams received medals and Ayrshire Captain John Rushbury accepted the Area Team Championship Trophy on behalf of the county team.