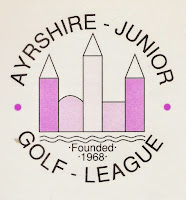 Though some of the clubs concerned will take part in other Ayrshire Junior Golf league events such as the Under 16 and Champion Of Champions competition, the loss of clubs in the League Championship competition is a worrying trend, with less than half the clubs taking part now than the number that competed in the early 1990's.

Following the withdrawal of Caprington, two sections of five teams will play throughout the season, with the section winners progressing to the final to conterst the league Championship.