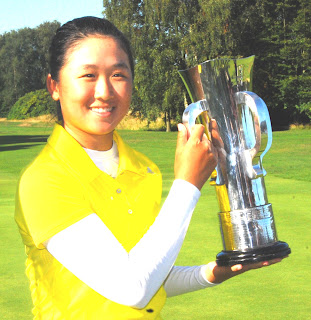 Jing Yan, the 17-year-old who, last Friday, became the first player from China to win the the Girls' British Open Amateur Championship in its 94-year history, is in the field for this coming week's Ladies' British open amateur stroke-play championship over 72 holes at Prestwick Golf Club, Ayrshire from Wednesday to Friday, August 21 to 23.

So too is the 18-year-old Italian women's amateur stroke-play champion, Roberta Liti, whom Jing beat by one hole in the Under-18s' championship final at Fairhaven Golf Club, Lancashire on Friday.
Singapore-based Jing speaks fluent English. Her father is a golf commentator for the ESPN TV Channel. Her Australian coach for the past 10 years, Greg Anketell was also supporting her in last week's Under-18s championship in Lancashire.

Withdrawals have reduced the original entry to 102 but it is a field of quality for a venue which has its roots in the history of Major competitive golf.

The Ladies' British Open Amateur Stroke-play Championship competitors will be tackling a shortish  course (6,214yd) by modern standards  but what it lacks in length it will more than make up for with the ladies' par of 74 reflecting the degree of difficulty.

Driving off the first tee at Prestwick can be a daunting prospect for those unable to
block out of their mind the fact that a railway line runs parallel with the hole.

Then there's one of most formidable hazards in golf - The Cardinal's bunker at the third hole ... long and deep with a very high face.

As an American team, well beaten by its European counterparts, found out in a Palmer Cup students' match a few years ago, it is not a big hitter's course. It is made for players with short-game expertise and the ability to read the subtleties of the putting surfaces.

The outward half has four par-5 holes, three of them in quick succession - the seventh, eighth and ninth. Sarah-Jone Boyd (Truro) will be defending the British title she won at Shandon Park Golf Club, Belfast last year.

Also is the field is Curtis Cup and Vagliano Trophy player Amy Boulden (Conwy) who looked to have last year's championship in the bag until she slipped up over the closing holes.
Sarah-Jane also won this year's English women's amateur championship which has switched to a stroke-play format. Boyd is not the only defending champion in the field. Leona Maguire from the Slieve Russell Club, Ireland, winner of the Ladies' British Open Amateur  stroke-play at Royal Ashdown Forest GC in 2011, is bidding for a repeat win.


Leona's twin sister Lisa, also a GB and I international player, will be there too.Other leading contenders include Woburn's Lauren Taylor, the youngest-ever winner at the age of 16 of the Ladies' British Open Amateur Championship at Royal Portrush in 2011. Lauren is now a student at Baylor University, Texas.
Another English player at college in the States is Meghan MacLaren (Wellingborough), winner of the Irish women's open amateur stroke-play soon after completing her first year in America where she won three tournaments as a freshman.

Scottish champion Alyson McKechin (Elderslie) will have had some playing experience over the classic Prestwick links as will the new Scottish U18 girls champion, Connie Jaffrey (Troon Ladies).
Ailsa Summers (Carnoustie Ladies), impressive winner of the St Rule Trophy over 54
holes at St Andrews a couple of months ago, will be in the mix if she can reproduce
that kind of form.
Posted by AJM at 8:02 pm