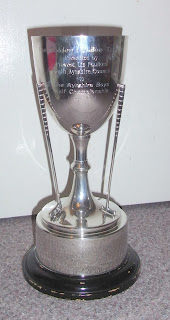 The first round of the 2013 Ayrshire Boys Matchplay Championship took place at Prestwick Golf Club on Tuesday 6th August.

Newly crowned Ayrshire Boys Champion Louis Murray (Troon Welbeck) having won the Tom Lehman Trophy at the Troon Municipal courses earlier in the day, eased through his first round match against clubmate Craig McKenzie by 2 & 1.

In the semi final on Wednesday, Murray will face Shaun Hedger (West Kilbride) who defeated Murray McCrone (Troon Welbeck) by 2 & 1 in their opening round match.

The other semi final will feature Darryl Lynch (Ayr Belleisle), who beat Connor McKay (Loudoun) in the opening round by 3 & 1, and Callum Gorrie (Kilmarnock Barassie), who was a 2 & 1 winner against Jack Purdie (Largs) on Tuesday evening.

The semi final matches will take place on Wednesday evening with the final scheduled for Thursday.