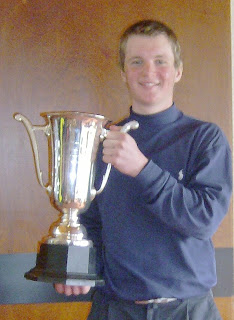 Michael Stewart (Troon Welbeck) - pictured right - has recorded his first win in this, his first year of a golf scholarship at East Tennessee State University.

Stewart shot rounds of 72, 70 and 71 for a three-under-par total of 213 to win the Atlantic Sun Conference Championship by one stroke at Keith Hills Country Club in North Carolina.
The 2008 Scottish Boys Champion and SGU Junior Order Of Merit winner was in 10th place going into the final day but his one under par 71 in windy conditions of 25 to 30mph with even stronger gusts saw him surge through the field to the top of the leader board as the other challengers faultered in the conditions, whilst Stewart came back in 33, three under par for his winning total.
Stewart's performance helped East Tennessee State finish fourth of 11 in the team event.
LEADING FINAL TOTALS
213 - Michael Stewart (East Tennessee State) 72 70 71
214 - Vaita Guillaume (Campbell University) 69 69 76
Posted by AJM at 9:26 pm