Troon St. Meddans Centenary captain, Jim Pennington (pictured below, on the right), opened a year of Centenary celebrations in the club when he drove the ceremonial first ball on the evening of Saturday 11th April 2009, from the first tee of the Troon Lochgreen course. 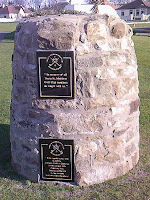 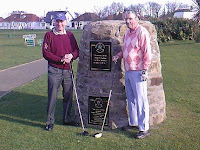 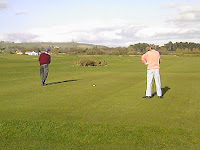 Assisting in the ceremonial drive off was club treasurer David Hay whose tee shot - pictured right -was equally as impressive as that of the Centenary Captain, in the presence of a large gathering of members and guests.

Th evening also saw the unveiling and dedication of a memorial cairn, near to the first tee at Lochgreen. The large cairn bears two marble plaques. One is in memory of club members no longer with us whilst the other notes that the cairn contains a time capsule which is destined to be opened in 2109, during the bicentennial celebrations of the club.

The cairn was dedicated by the Reverend David Harper of Troon St. Meddans church and the club secretary, Frank Greer, thereafter introduced two special guests, Sir James Armour - pictured on the right - and

Stewart C. Wilson - on the left -, who had both been boyhood members of St. Meddans and had both brought honour to the club by winning the British Boys Championship in 1947 and 1955 respectively. Both gentlemen spoke to the assembled crowd, speaking highly of the club and other notable former members including J.B. Stevenson, Peter Howie, George Mills and Bill Lockie. 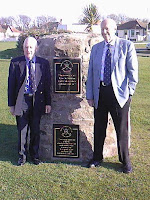 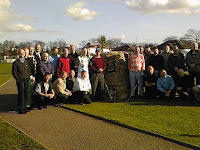 At the conclusion of the official ceremony the assembled company enjoyed a drinks reception with a toast to the club being proposed by Captain Jim Pennington.