Troon Welbeck - pictured below - won the Matt Lygate Trophy and title of Ayrshire Boys Team Champions for the first time, on Sunday 19th April, when the 2009 event was held at Ardeer Golf Club. 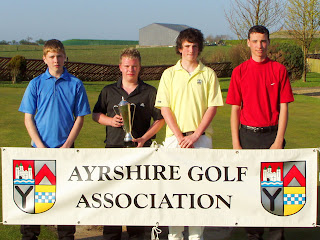 15 clubs contested the championship, which was first played in 1988, and it was the host club, Ardeer, who set the early target with a three scores from four total of 236.
Led by 2008 Ayrshire Boys Championship runner up, Sam Findlater, who returned 78, the Welbeck team of Sam Findlater, Charles Macneill, Callum Beveridge and David Wilson overtook the total with all four players scoring in the 70's for a team total of 227. 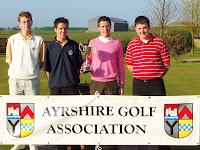 The Ardeer team of Daniel Forbes, Joseph Howie, Michael Howie and Richard Wyllie - pictured left - had the consolation of recording the best nett team total and winning the Andrew D. Nimmo Trophy for their efforts. 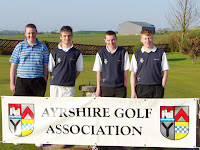 Runners up in the scratch championship were West Kilbride - pictured right - represented by Cameron McLean, Kieran Howie, Fraser McKay and Ross Hunter, who returned a team total of 242. 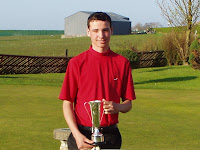 In the competition for individual prizes, David Wilson (Troon Welbeck) - pictured left - won the Prestwick Circuits Trophy for the best scratch score of the day with his one over par 72. 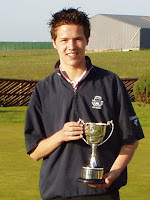 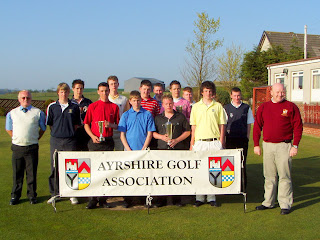 Prizes were presented to the successful individuals and teams, at the conclusion of the championship, by Ritchie McCulloch, Captain of Ardeer (on left of picture).
Posted by AJM at 10:10 pm